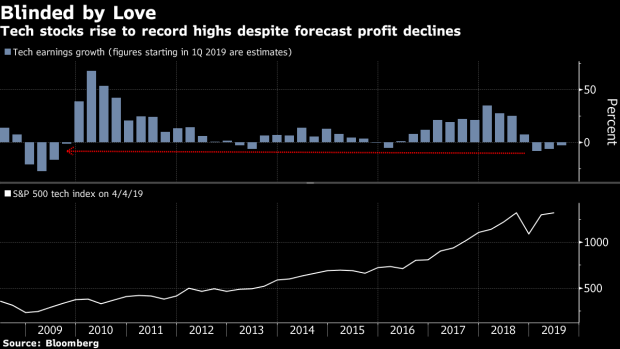 (Bloomberg) -- Technology stocks have reclaimed record highs, making them one of the first groups to put last year’s carnage behind them. But everywhere else you look in the industry, bad news is overwhelming the good.

Profits are shrinking at an alarming pace, valuations are reflating and politicians want to break the companies up. Semiconductor orders have slumped, and spending on infrastructure to support the cloud is off. And yet the addiction won’t break. Shares are up more than 30 percent since Christmas.

It’s a familiar sight to anyone who’s been watching the broader U.S. stock market, which just posted its best quarter in 10 years even as earnings estimates slid. However grim things look, too much money has been lost by sitting out. Mike Wilson, the chief U.S. equity strategist at Morgan Stanley, says groupthink is taking over, a force that while capable of provoking powerful rallies, usually precedes a cycle’s peak.

If this is the end, it’s been a tough one to miss. The Nasdaq 100 just rose for the 14th time in 15 weeks and is about one big day away from its August record. Fourteen companies, among them chip standard-bearer Advanced Micro Devices Inc. and Lam Research Corp., are up more than 50 percent from their Christmas lows, and only seven stocks in the gauge are down over the stretch.

All this as software and electronics makers prepare to report an 8.7 percent drop in first-quarter profit, analyst estimates compiled by Bloomberg show. Should that forecast come true, that would mark the worst income decline since 2009.

But investors aren’t fazed, rushing back to an industry that was the market’s favorite as recently as last summer. At 4.4 times sales, tech stocks trade at a multiple that is twice as high as the rest of the market. That’s close to the highest premium since 2000.

Bulls can be forgiven for their passion as tech firms have proved a reliable source of superior growth over the past four years, a stretch when recession fears kept haunting the market. For 15 straight quarters through last June, tech profits outpaced the S&P 500, with the growth gap averaging 6.3 percentage points.

"Everybody is trying to find growth at all costs and there’s not a plethora of options," said Mark Lehmann, president of JMP Securities. "People are willing to pay more."

To be sure, the industry has managed to innovate itself out of growth slumps in the past. Who knows what they’ll make off everything from self-driving cars and artificial intelligence in coming years.

But right now, tech has a growth problem. Products such as smartphones have entered a maturing phase and parts makers like semiconductor companies have seen weak demand from a range of end markets including data centers.

Analysts don’t see any quick rebound, projecting essentially flat sales through the third quarter of 2019. Partly reflecting the bleak outlook, their price targets for tech stocks pointed to only a 2 percent gain over the next 12 to 18 months. That rate of expected returns trails all other S&P 500 industries except for utilities.

To Edwin Davison, a senior equity analyst with DuPont Capital, the resurgence in tech shares, particularly those sensitive to economic swings like chipmakers, reflects an improved macro backdrop -- the Federal Reserve has turned more dovish, the Sino-U.S. trade talks are progressing and China has introduced another round of economic stimulus.

Once companies start rolling out their financial reports, investors will focus on whether all the positive developments translate into gains for individual businesses, he said.

“People are starting to bake in some of these things: trade, the Fed, China stimulus,” Davison said. “Things have stabilized. I think there are still questions about exactly what the second half looks like.”

The persistent love for tech stocks is reminiscent of the 1990s Internet frenzy to Leuthold Group. Granted, the excitement today pales in comparison and is motivated by nothing other than the fact that the industry is a default choice when growth is scarce. Still, the danger of crowding is no less pronounced, said Doug Ramsey, the firm’s chief investment officer.

“In the late 1990s, it was the carrot. In this cycle, it’s been the stick,” Ramsey said. “Different paths, but each has led to similarly precarious portfolio bets.”

To contact the reporters on this story: Jeran Wittenstein in San Francisco at jwittenstei1@bloomberg.net;Lu Wang in New York at lwang8@bloomberg.net