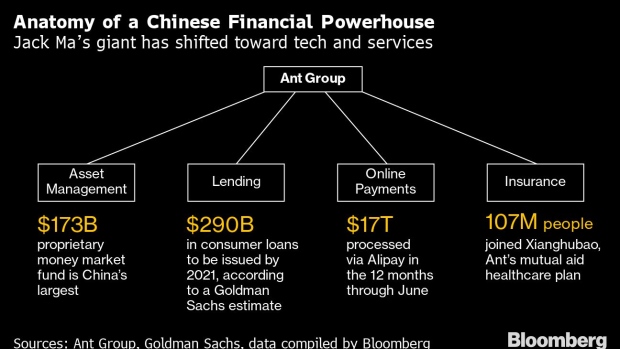 Employees work inside the Ant Group headquarters in Hangzhou, China, on Sept. 28. , Bloomberg

Demand for the record $34.5 billion IPO has been so strong this week that Ant decided to stop taking orders from big investors a day earlier than planned. In Shanghai, initial bids exceeded supply by more than 280 times. Some mom-and-pop investors in Hong Kong are taking on 20 times leverage to supercharge their bets.

Still, a smash-hit IPO doesn’t always translate into a long-term winner for investors. In Ant’s case, what could go wrong?

Here are some of the biggest risks:

Ant’s meteoric rise was made possible in part by China’s willingness to let it experiment. Now that the fintech giant is a dominant player in everything from payments to consumer lending, regulators are scrutinizing its every move.

They’ve placed caps on the interest rates Ant and other financial institutions can charge for consumer loans, imposed new capital and licensing requirements, and restricted the size of some asset management products, among other measures. Financial regulation in China can be notoriously difficult to navigate, as Ant alluded to in its prospectus: “These laws, rules and regulations are highly complex, continuously evolving and could change or be reinterpreted to be burdensome or difficult to comply with.”

The risks aren’t limited to China. Ant’s attempt to buy MoneyGram International Inc. was scuppered in 2018 by a U.S. government panel, while India recently blocked the company’s payments service amid rising border tensions. The Trump administration is mulling restrictions on Ant and Tencent Holdings Ltd. over concerns their payment platforms threaten U.S. national security, people familiar with the matter said this month, though any curbs would likely be challenged in court. The increasingly unfriendly stance toward Chinese tech firms is one of the biggest overhangs for Ant’s IPO, said Margaret Yang, a strategist at DailyFX.

“If investors fear further restrictions from the U.S. administration on Chinese tech companies, that might keep them away,” said Olivier d’Assier, head of applied research for Asia Pacific at Qontigo, a risk advisory firm.

Ant’s Alipay service revolutionized the way Chinese people pay for things, both online and in physical shops. But it didn’t take long for rivals like Tencent to offer competing offerings. Ant’s market share of the Chinese mobile payments business, once around 75%, has dropped to about 55% as of June. A similar battle is now heating up in Ant’s other big money-maker: credit. Tencent has a growing consumer loan business and other tech giants like JD.com Inc. and Xiaomi Corp. are piling in.

Then there’s the question of what Chinese banks will do. They currently pay billions in fees to Ant for originating loans to consumers and small businesses, but there’s no guarantee they’ll outsource that function forever. Ant itself has warned that partners may develop their own platforms to reach borrowers directly.

China’s government is also an ever-present threat. The country’s central bank is developing a digital currency, and it’s not yet clear how Ant’s Alipay service will fit into the new system. Any erosion of the company’s role in China’s payments infrastructure could have ripple effects on other Ant businesses including credit, which utilizes Alipay’s huge data trove to assess the financial strength of borrowers who often lack collateral or formal credit histories. “A key fundamental risk would be slower-than-expected growth in digital payments,” said Victor Galliano, an analyst on Smartkarma.

Ant and its lending partner MYbank have long boasted of a risk-management system that analyzes more than 3,000 variables, allowing customers to apply for loans with a few taps on a smartphone and receive the cash almost instantly if they’re approved. While the companies have been less forthcoming about default rates, they were clocking at just over 1% before the pandemic.

That number is impressive, but is it sustainable? Even Ant has cautioned that its lending algorithms have yet to be fully tested in a credit cycle. What’s more, the data underpinning its models could become harder to amass as attitudes toward privacy slowly shift in China.

Minority shareholders are unlikely to have much say when it comes to the way Ant is run. Ma currently controls the company through several entities that own Ant shares, and he’s likely to maintain significant influence after the IPO. Alibaba Group Holding Ltd., meanwhile, owns about a third of Ant and will buy more shares to avoid having its stake diluted.

Of course, anyone who backed Ma and his leadership team has thus far enjoyed stunning long-term returns. Alibaba, which the former teacher also co-founded, has surged more than four-fold since its New York IPO six years ago.

But investors have reason to be wary. In 2010, Ma hived off Ant’s predecessor from Alibaba over the objections of shareholders including Yahoo! Inc. While he cited potential regulations that would have curbed foreign ownership of financial businesses, there may have been workarounds.

Investors will have to judge for themselves whether all these risks are reflected in Ant’s stock price. The company will command a valuation of at least $315 billion before it starts trading on Nov. 5, making it bigger than JPMorgan Chase & Co.

Ant’s IPO pricing translates into a multiple of about 36 times estimated 2021 earnings, approaching the high end of its peers, according to Bloomberg Intelligence analyst Francis Chan.