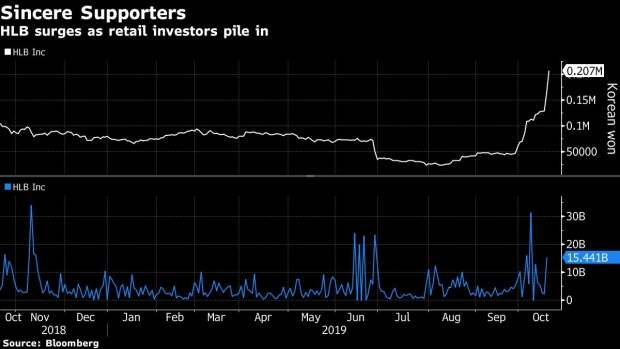 (Bloomberg) -- A Korean biotechnology stock has surged more than sixfold since August as investors looked beyond an earlier failed clinical study in favor of the prospect of its cancer drugs reaching the market.

HLB Inc. surged as much as 24% in early trading Tuesday. The shares soared by the daily limit of 30% yesterday after Chief Executive Officer Jin Yang-Gon told local media that the company will develop five cancer drugs in the next five years. The company now has the second-most valuable stock on Kosdaq, with a market capitalization of $6.4 billion. It is also the biggest winner among 1,350 small-cap stocks in the past three months.

The company said in September that its own study for a cancer drug called Rivoceranib was successful. It’s now scheduled to have a pre-new-drug-application meeting on Oct. 24 with U.S. Food & Drug Administration officials, according to its Oct. 18 statement. A company spokesman couldn’t immediately be reached by Bloomberg.

In July, HLB shares touched their lowest level this year following an announcement a month earlier that clinical research for its cancer drug failed.

“Most of the traders are apparently retail investors, seemingly looking for a yield from some biotech stocks that plunged with botched clinical researches recently,” said Heo Pil-Seok, chief executive officer at Midas International Asset Management Ltd. “Money is so abundant everywhere, and there’s herd behavior in the market.”

To contact the reporter on this story: Heejin Kim in Seoul at hkim579@bloomberg.net

To contact the editors responsible for this story: Lianting Tu at ltu4@bloomberg.net, Margo Towie, Naoto Hosoda