The Canadian dollar may struggle in 2020 to top its stellar performance from this year.

That’s the message from the global head of foreign-exchange strategy at Credit Suisse who expects the tailwinds seen in 2019 to fade. While risk-sensitive currencies like the loonie should perform well if the global economy continues to firm, Shahab Jalinoos believes Bank of Canada policy makers will be quick to try to curtail a significant rise.

“The key risk is the BOC itself, which tends to talk more dovishly whenever CAD shows material strength,” Jalinoos said, using the market abbreviation for the Canadian currency. Additionally, the Bank of Canada’s search for a new chief may “create some uncertainty that hinders CAD appreciation,” he said. The central bank has formally started its hunt for a successor to Stephen Poloz, who is stepping down as governor in June.

The Canadian dollar was the best-performing major currency in 2019, notching a 5% gain against the greenback in a year that saw foreign-exchange volatility sink to record lows. Resurgent commodity prices helped buoy the currency, as did a central bank that kept borrowing costs steady, making it an outlier in the global easing trend.

For those reasons, Jalinoos sees the dollar-loonie rate consolidating around $1.28. The U.S. dollar on Tuesday fell for a fifth straight day against its Canadian counterpart dropping below $1.30 for the first time in over a year. 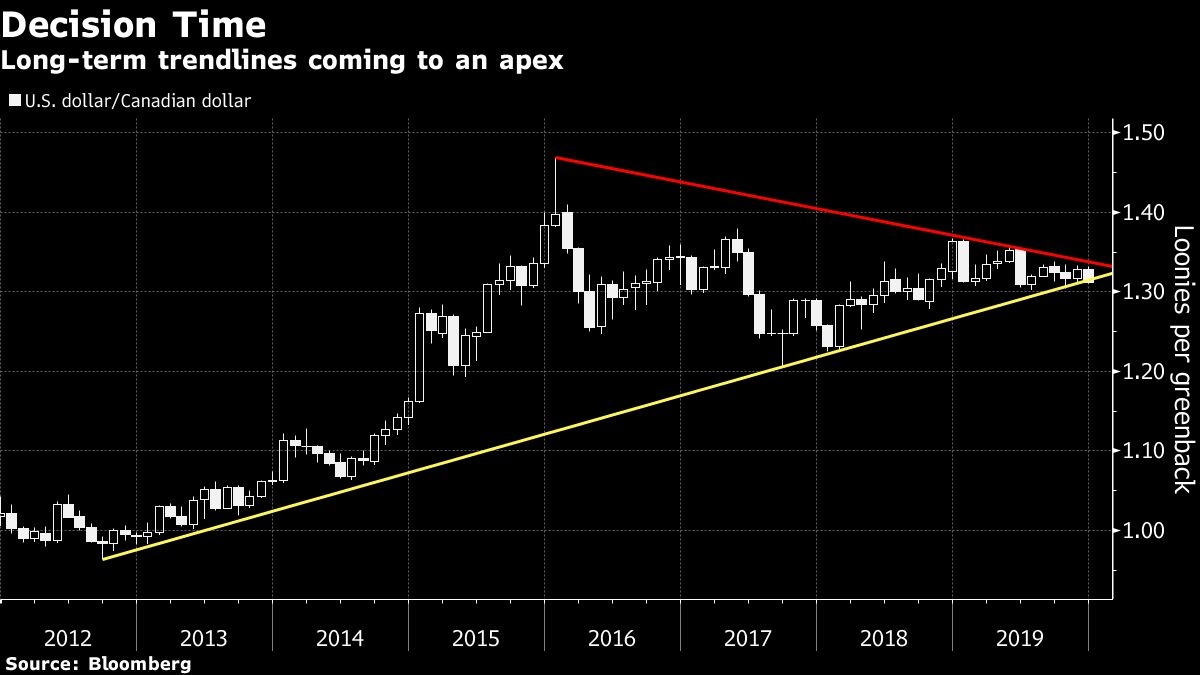 One technical indicator paints a brighter picture for loonie bulls. The pair posted a monthly close well below its long-run trend support at C$1.3155, signaling that there’s more U.S. dollar weakness in the offing. While chart patterns suggest firm support for the greenback in the low-to-mid-$1.30 range, there may be little support until it declines to $1.28.

Still, Bannockburn Global Forex sees the Canadian dollar’s run largely stalling out, with a forecast of $1.295 for the end of 2020. While the nation’s economic growth was resilient to a global slowdown in 2019, the data is poised to soften, according to the firm’s chief market strategist Marc Chandler. That should prompt the central bank to cut interest rates twice, a view reinforced by policy makers’ recent “shift from neutrality,” he said.

Domestic data since the Bank of Canada’s last rate decision of the year has been weak, with gross domestic product shrinking for the first time in eight months and the nation suffering its biggest jobs loss since 2009.

“The Canadian economy is weakening and the central bank will have to cut rates,” Chandler wrote in an email. “Typically, in a weakening USD environment, CAD lags on crosses.”