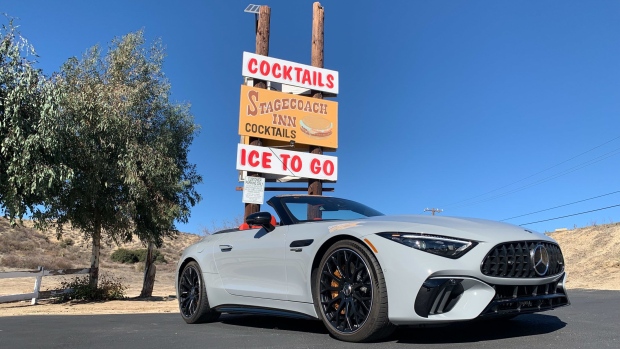 (Bloomberg) -- Scent is a sense we often forego when driving. Car windows closed to keep in air conditioning block the sweet smell of fresh-cut grass as we cruise down a neighborhood street; they keep out the pleasurable aroma of fresh bread as we pull up at the bakery, spring lilies as we cross a town square, or the crisp air we’d otherwise inhale as we drive through the mountains.

But convertibles are a very different matter—they allow the world of fragrance to bloom as we move through it. Even better, they let in all that vitamin D sunshine we’ve been craving all spring. And their wide-open tops let everyone else see just how great we feel behind the wheel.

Today’s convertibles are a far cry from the tiny two-seaters of years past. Some can fit four adults comfortably, and they go just as fast as their roofed-siblings. Here are seven of our favorites available at dealerships today. Hat, sunscreen, and sunglasses recommended.

Don’t let that price fool you—just because the Stingray convertible is tens of thousands of dollars cheaper than some of the cars on this list doesn’t mean it’s not as fun. Nothing could be further from the truth. The 6.2-liter V8 mid-engine droptop offers an array of thrills refined over 70 years on the road, and a brash driving personality long envied by those who make fancier European exotics.

The Corvette has a retractable hard top that fits seamlessly to the angles of the body and deploys at speeds of up to 30mph; big gaping front air vents, black exhaust tips and 20-inch wheels in the rear give it an aggressive mein.

While the ’Vette is the most affordable car on our list, it doesn’t feel at all cheap inside the cabin. The entry level model offers rearview cameras, eight-way power seats, and premium surround sound. At higher trim levels, you can get leather-wrapped instrument panels, heated and ventilated seats, and one of eight interior color options. One note: Some convertibles, such as the Porsche 911, have a tiny rear seat, this one doesn’t offer even that. Seating in the Stingray convertible is strictly limited to two.

The Turbo badge represents the top of Porsche’s 911 sports car line, promising more power and performance than its lesser Carrera siblings. And with Porsche dominating the sports car market these days, it’s no accident the Stuttgart, Germany-based automaker is Volkswagen AG’s most profitable brand.

The 911 Turbo Cab falls well within that winning criteria. If you want the Swiss Army knife of convertibles, this is it: It’s fast, practical, and sexy. It has a back seat, though it’s not really functional for four people with the roof up. (Compare to the Bentley Continental convertible.) But it costs a little less than the Bentley, and is quicker, too, with a zero-to-60mph sprint time of 2.8 seconds. Max power tops out at 572hp.

The only difficult thing about this extremely popular car is the patience you’ll need once you order one. Wait times at many dealerships in California and New York extend into the fall.

Bentley’s bread-and-butter convertible has been at the top of best-of lists for almost a decade, and for good reason. The handsome convertible combines Bentley’s classic British craftsmanship and elegance with a downright mean W12 and optional V8 engine.

Bentley offers the Continental convertible in multiple variations, including the GTC Speed, the GTC S, and the GTC Mulliner edition, which can achieve 650bhp and has a 3.6-second zero-to-60mph sprint time. Top speed is 208mph—that’s faster than the Ferrari on this list.

But where the Bentley really excels is in space: It has enough room in its luxurious cabin to fit four adults comfortably and boasts a trunk that will hold luggage to last the weekend—which is more impressive than it might seem, since some convertibles like the Jaguar F-Type lack even that.

This is the modern version of the iconic shape that’s dotted hipper city neighborhoods since it was introduced in the 1950s.

Vintage SLs are much beloved for their square bodies and reliable, easy-to-drive characteristics. The new version seems to have been taking protein powder and steroid shots for a few decades. (It shares no components with the old SL; the only thing the two have in common is the name.)

With up to 577hp and a zero-to-60mph sprint of 3.5 seconds, the new SL has a top speed of almost 190mph. An active rear spoiler with six settings, multiple drive modes, and a lightweight soft top that shaves 46 pounds off the previous version all lend it the kind of aggressive, nimble, and precise performance that makes driving fun, not a chore.

Inside, Mercedes’s famous creature comforts, including fragrances, infotainment, luxurious trims, and even an air scarf, will make you want to stay in the car even after you arrive at your destination.

With the first V6 engine from Ferrari in nearly 50 years, the sexy 296 GTB combines rear-wheel performance that will dominate the track with useful practicalities like a front splitter that’s high enough to clear speed bumps and divots and a hybrid system that lends gas efficiency and 16 miles of electric-only driving.

Driving it is quite a thrill. At just 3,241 pounds and 819hp, it can go to 62mph in 2.9 seconds and hit a top speed of more than 205mph. Its steering, braking, and balance are smooth on curvy highways and slower back roads. Best yet, it has a front trunk that will hold two carry-on cases or a few duffel bags—the perfect excuse to take this convertible away on holiday.

The convertible version of Lamborghini’s most drivable, enjoyable all-around car, the EVO RWD Spyder adds a sharper-looking front shark nose and new lines across the rear diffuser. If you look closely, you’ll notice it also has a wider rear air intake than its 4WD counterpart.

Convertibles are generally not considered as “serious” as coupes when it comes to performance, since the added weight of the top mechanism and compromised tensile strength of the vehicle’s body make it slower than its siblings, but this RWD Lamborghini V10 drop-top is fast: It has a max speed of more than 200mph and can hit 62mph in 3.5 seconds.

Admittedly, the AWD EVO Spyder is quicker than that by about a second—but that Huracán convertible also costs more. This one still gives all of the attitude for $60,000 less. Never mind the 15mpg fuel efficiency—if you want to save the planet, don’t buy a new supercar.

McLaren’s drop-top sits at the top of the brand’s supercar group, which includes the 720 Spider and the 720S. It’s not as extreme as the McLaren Senna, but it’s far more powerful than other McLarens, like the 600LT. Only 765 of them will be made.

The 765 has carbon-fiber aero elements throughout that aid its light weight of 2,818 pounds. Which means that with its 755bhp engine, it’s very fast: It goes from zero to 60mph in 2.7 seconds and reaches a top speed of 205mph.

Meant for the track despite its convertible top, the 765 is relatively bare inside in order to save weight, but it does include supple leather trim and a well-made single-piece retractable roof that drops in just 11 seconds. It’s so quiet inside, you may forget you’re in a convertible altogether. That is, until you inhale the smell of burning rubber.

All prices are approximate, depending on delivery fees and taxes.