U.S. airports are the busiest since the pandemic began -- the strongest sign yet of a domestic travel revival that’s leading the way in jet fuel’s comeback this summer.

Passengers checking in through security at U.S. airports surged to 1.85 million on Sunday, the highest since early March 2020, according to Transportation Security Administration data. The flurry of travelers making their way through airport terminals has steadily climbed for the past month and is now only about 30 per cent lower than levels the TSA saw at the same time in 2019. And we haven’t even reached the U.S. Memorial Day holiday weekend yet, the unofficial start of summer travel.

Most of the recovery has come from domestic flights, with international and business travel lagging, and the pace of overseas flights remaining weak until next summer, according to George Ferguson, senior aerospace and airline analyst at Bloomberg Intelligence. United Airlines Holdings Inc. CEO Scott Kirby said at a Bloomberg Businessweek virtual event on Monday that its domestic leisure travel business is more than 100 per cent recovered from the pandemic.

“We think this summer is going to be a good summer,” said Ferguson. “The cheaper you can deliver seat miles, the more capacity you put in the market place, the closer you are to 2019 levels.” 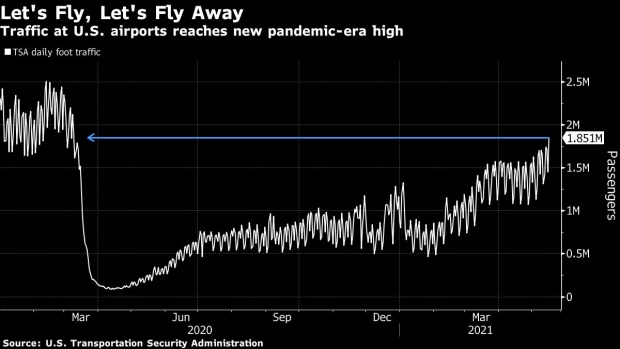 The uptick in airport traffic in the world’s largest oil-consuming country is occurring as leisure travelers eagerly book trips after more than a year of virus-related lockdowns. A gauge of U.S. jet fuel demand has already more than doubled since the depths of the pandemic -- and is expected to surge 30 per cent this summer from the first quarter -- a good sign for refiners who faced tough profit margins last year when an overwhelming amount of the fuel planes use piled up with airliners grounded.

In the third quarter, jet fuel demand is projected to reach 1.47 million barrels a day, more than 50 per cent higher than a year earlier, according to the U.S. Energy Information Administration.

Airlines operating in the U.S. are responding to Americans’ renewed travel enthusiasm. United said Monday it will run 80 per cent of its pre-pandemic U.S. schedule, while ultra-low cost carrier Allegiant Travel Co. said last week it plans to hire nearly 200 pilots in the coming months due to rising travel demand.

But a comeback in long-haul flights is still a ways off. Any overseas flight recovery will likely be weak until the summer of 2022 as the varying pace of vaccinations and virus infections in other parts of the world lead to a mixed desire to travel, according to a Bloomberg Intelligence report.

Plus, border restrictions will need to be loosened first. Currently, the European Union is working toward reopening the bloc to vaccinated travelers from countries with low infections rates, which would help support a global travel recovery.