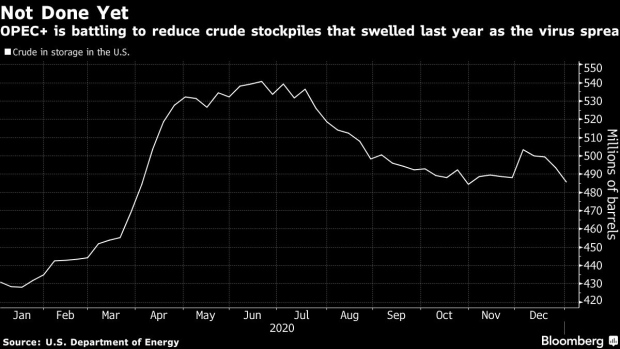 A pump jack operates near Sublette, Kansas, U.S., on Friday, Sept. 25, 2020. After all the trauma the U.S. oil industry has been through this year -- from production cuts to mass layoffs and a string of bankruptcies -- many producers say they’re still prioritizing output over reducing debt. Photographer: Angus Mordant/Bloomberg , Bloomberg

(Bloomberg) -- Any attempt by U.S. shale and other oil producers to boost output this year will backfire and lead to lower prices, according to the energy minister of the United Arab Emirates.

Oil prices have surged in the past two months with the development of coronavirus vaccines. They jumped again last week when Saudi Arabia said it would unilaterally cut crude output by 1 million barrels a day in February and March, a move the kingdom described as a “gift” to other producers.

That’s led the International Energy Agency to state that shale firms -- whose output plunged last year when the virus spread and demand for energy crashed -- would again be profitable.

With demand still fragile, they “are wise not to jump the gun and overproduce during the recovery year,” UAE Energy Minister Suhail Al Mazrouei said in an interview on Tuesday before a forum organized by Gulf Intelligence, a Dubai-based consultant. They “need to be careful not to flood the market.”

The Organization of Petroleum Exporting Countries and partners such as Russia, a grouping known as OPEC+, agreed to cut output by almost 10 million barrels a day in April. Their efforts and a rapid improvement in energy demand in China and India buoyed oil prices.

Brent crude has risen 11% to $57.30 a barrel this year. But it’s still down more than 10% from pre-pandemic levels and below what most major exporters need to balance their budgets.

U.S. crude stockpiles climbed with the onset of the virus and as economic activity plunged. Though they fell from a peak of 541 million barrels in June to 485 million on Jan. 1, they’re still up 12% from a year ago. The IEA sees the global glut enduring for the rest of 2021.

“It’s not going to be easy to just go and build production, seeing the inventory levels where they are today,” Mazrouei said.

Shale companies in the U.S. pumped about 8.1 million barrels daily in January. That compares with 9.3 million in March 2020.

At a virtual meeting last week, OPEC+ agreed to keep production in February and March unchanged for all 23 members bar Saudi Arabia, Russia and Kazakhstan. The latter two will increase output by 75,000 barrels a day. The UAE pumped 2.5 million barrels daily in December, making it OPEC’s biggest producer after Saudi Arabia and Iraq.

The Saudis’ decision to cut production for two months comes amid renewed lockdowns in Europe and Asia and a spike in U.S. cases. Those have forced OPEC+ to slow the pace at which it eases last year’s curbs.

Global demand won’t return to pre-pandemic levels until the end of 2021 or early 2022, Mazrouei said. When that happens, Mazrouei said he’s confident OPEC+ countries can regain any market share they’ll lose to others by curtailing output.

“We are the lowest-cost producers as OPEC countries,” he said.

Abu Dhabi plans to expand production capacity to 5 million barrels a day by 2030 from 4.2 million now and to start trading its Murban crude on an exchange this quarter, in an attempt to make it a benchmark for Middle Eastern oil. Those moves “will enable us to compete and will enable us to put those volumes because they will be needed,” Mazrouei said.

In the more immediate term, the market’s ability to absorb the return of the Saudi barrels in April will depend on whether vaccination roll-outs in major economies are successful, Mazrouei said.

“If that happens and we see a demand recovery, then I think the market can absorb it,” he said.

Mazrouei said OPEC+ remained united, despite the alliance coming under strain as its members’ finances deteriorate. Iraq, Nigeria and Angola have come under fire from the Saudis for breaching their quotas. UAE officials privately questioned the benefits of OPEC membership in November, after Riyadh criticized Abu Dhabi for briefly pumping above its cap.

The minister said the UAE was committed to OPEC and that the wider grouping would continue working to balance supply and demand.

“This is not a temporary relationship,” Mazrouei said of OPEC+. “This is hopefully a permanent relationship.”