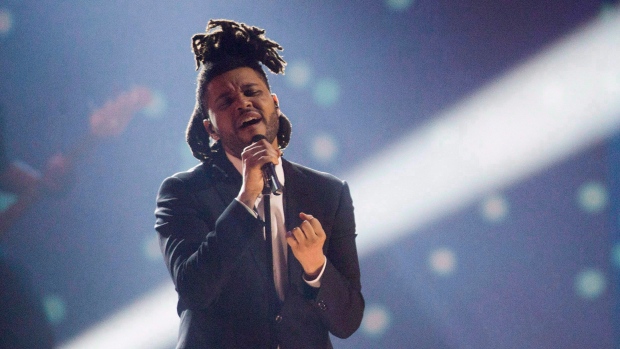 LONDON -- Canadian pop star the Weeknd says he's distancing himself from H&M after it was revealed the clothing giant had released an advertising image of a young black model in a sweatshirt with the words "Coolest monkey in the jungle."

The brand removed the image and apologized, but kept in place other designs modeled by white children.

Toronto native the Weeknd tweeted he was "shocked and embarrassed" and "deeply offended" and would no longer work with the clothing brand.

woke up this morning shocked and embarrassed by this photo. i’m deeply offended and will not be working with @hm anymore... pic.twitter.com/P3023iYzAb

U.K. Labour Party lawmaker Kate Osamor tweeted that she was "totally shocked, dismayed to say the very least" by the image and, addressing H&M, asked "do you think this imagery is an appropriate representation of a young black boy?"

The retailer said Monday that the "image has now been removed from all H&M channels and we sincerely apologize to anyone this may have offended."

The Weeknd first announced in November 2016 that he would be handpicking items for a spring 2017 clothing line bearing his name. He later released a fall line with clothing including jackets, sweatshirts and hoodies.

James posted a refreshed image showing the model wearing a crown. Diddy posted an image with a sweatshirt revised to read "Coolest king in the world."

@hm u got us all wrong! And we ain't going for it! Straight up! Enough about y'all and more of what I see when I look at this photo. I see a Young King!! The ruler of the world, an untouchable Force that can never be denied! We as African Americans will always have to break barriers, prove people wrong and work even harder to prove we belong but guess what, that's what we love because the benefits at the end of the road are so beautiful!! #LiveLaughLove❤️ #LoveMyPeople🤴🏾👸🏾👨🏾‍⚖️👩🏾‍⚖️