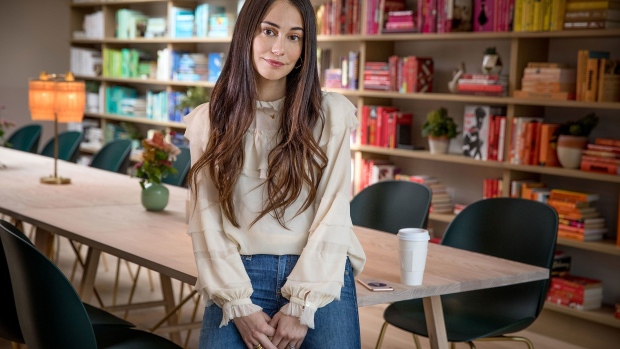 (Bloomberg) -- After stepping down from Wing, the chain of groovily appointed women’s co-working clubhouses that was roiled in the early months of Covid-19 with complaints of staff mistreatment, co-founder and onetime Chief Executive Officer Audrey Gelman ducked out of the spotlight. Two years on, she is reemerging—in Cobble Hill, the picture-perfect brownstone Brooklyn, N.Y., neighborhood that is playing host to her next act, a disarmingly cute shop called the Six Bells.

Like its predecessor, the Six Bells is something of a utopian dreamscape. But Gelman has moved on from the feminism industrial complex. Now she’s a twee shopkeeper, selling gifts and goodies down the road from local resident Daniel Craig’s favorite fishmonger.

The Six Bells is a “country store of homewares from a world far away,” according to the pretty cursive letters on the chalkboard outside. It might be easier to slip down the folksy wormhole if you ignore its Court Street neighbors: a slickly-styled urgent care facility for pets, and the squeaky-clean branch of a German luxury real estate juggernaut.

Inside the shop, Gelman has traded in her think-millennial-pink aesthetic for an old-timey vibe that evokes an era well before women could have their own credit cards. Filled with weathered antiques and spanking new cottagecore tchotchkes, her carefully curated emporium is a jumble sale by way of Wes Anderson, stitched out of wide wale corduroy and patchwork quilts. There are antique baskets ($65) and a hand-painted recipe box ($65). Fancy a vintage spatterware nesting bowl set? They’ve got those, too ($175).

Mind you, none of this is just merch. Gelman’s new business is the brick-and-mortar redoubt of a tiny fictional English village called Barrow’s Green. It’s a whole thing. There’s a backstory, complete with a cast of characters. Pity the clerk who would prefer to ring up items and be left alone. The Six Bells employee is more of a docent who must field a steady stream of inquiries from the customers who have questions about Gelman’s retail reboot.

In a 2018 Vogue profile pegged to the Wing’s bid at global expansion, Gelman was photographed looking formidably beautiful in stilettos in the Jardin du Luxembourg in Paris and quoted on such things as leaning in and embracing her ambition. Now she has conjured a whole world to do the talking. There are visual aids on hand to help shoppers get oriented: an annotated watercolor map of the imaginary idyll hangs on the wall, as do a series of vintage oil portraits whose brass plaques introduce visitors to the enterprise’s patron saints, from a town gossip and a businessman to a village rabbi named Haskel Frumpkin.

As far as the products go, there’s not much of a throughline: antiques sourced from Amish country, pretty jugs from small-town English ceramicists, and Fair Isle socks. The collection called to mind something Gelman had said in the Vogue story: “The goal is to create spaces that women have never had before and to do it all over the world. From Detroit to Abu Dhabi.” This time, she’s bringing the globe under one roof. Fragrant olive-oil soap beads are a bestseller; they come from Tripoli and look like grapes.

As I continued to peruse the wares, a hodgepodge of old and new, provinces hither and yon, the Pinterest board that I imagined Gelman must have made in her Six Bells ideation phase was a seizure of references. The Vermont Country Store. Beatrix Potter. 1980s Laura Ashley. The English manor dairy farms that I faithfully read about in the Financial Times’s House & Home section. Actually, make that a pig farm. While the store website offers cow-themed items such as decorative wall hangings, a stenciled wastebasket, and a wooden cow weathervane, in store it’s all about pigs. The pig-shaped cutting board is  $50.

I had so many questions. Did I want a miniature quilt that costs $725 and might be too small to work as a bed covering?  (It’s framed, so technically it qualifies as art.) Did I wish to return in a couple of weeks to check out the soon-to-arrive ceramic soup bowls and “toast plates”? When did I last eat toast?

Strewn among the hygge-generating wares was a smattering of more practical items—colorful and clean designs that would make charming hostess gifts. Embroidered place mats from French design house Casa Lopez. Twisted candles from Wax Atelier, out of East London. A rack of tote bags printed with bright, red tomatoes. They were handsome and jolly. On the other hand, they cost $58 each.

Interspersed among the shelves were little tableaux of purchasable products that I feared might be called “vignettes.” A seating area set up with a teacup and saucer and outrageously ruffled corduroy pillows called to mind an engorged dollhouse. Center stage was occupied by a partially set table that I could only imagine was meant to inspire a shopping spree of jauntily patterned linens. Every time I approached it, though, I was overcome with the feeling that I’d arrived at a dinner party hours too early. Something wasn’t right.

The shop’s website is another story. Or rather, it’s the same story, but the telling is excellent, the signal fit for the noise. The imaginative merchandising takes flight, not altogether surprisingly, in the realm of the internet.

Shortly after my visit to Gelman’s new headquarters, I settled in the (woefully un-cute) ergonomic chair in my home office, and hovered over the interactive map’s Post Office. Now, I learned about a recent incident of note, a profusion of “poison pen letters filled with incendiary accusations” directed at prominent villagers. Just to the east of the squiggle called the Nidd River is the Six Bells, the name of the fictional town’s main shop. It “also functions as a small inn, where visitors to Barrow’s Green can sleep in one of six rooms, each designed in a different color motif.” Is Gelman mulling a future chapter as an innkeeper? There’s a proposition I would invest in.