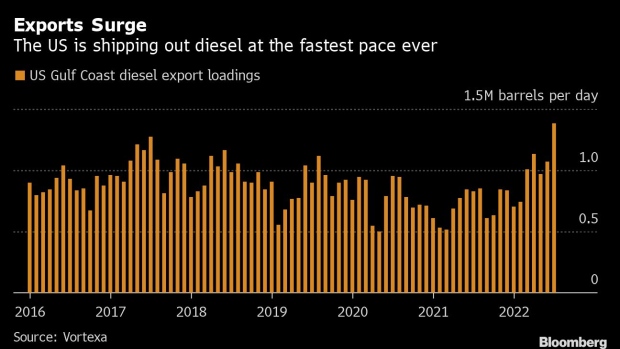 (Bloomberg) -- The US is exporting diesel at the fastest ever rate as the global market’s thirst for fuel remains insatiable.

As much as 1.39 million barrels a day of diesel has left the US Gulf Coast so far this month, around 10% higher than the previous daily record for month set in July, 2017, according to oil analytics firm Vortexa, which began trading the data in 2016. Adding gasoline, fuel exports out of the Gulf Coast topped 2 million barrels a day in the first half of July, also a record.

Strong exports highlight just how much the world is still relying on the US for the fuel that powers the global economies, farming and industries. Gasoline is the top transportation fuel in the US but not the rest of the world and the effort to secure diesel is intensifying as demand continues to outstrip supply.

The bulk of US diesel exports are headed to Mexico, Brazil, Chile and Argentina. Fuel crises have been unfolding in parts of Latin America, leading to violent protests and political upheaval. These countries have pulled a greater amount of diesel from the US Gulf Coast in recent months. In addition to Latin America, the arbitrage for transatlantic diesel exports has also improved with a stronger European market and a drop in freight rates, spurring more shipments from the US Gulf Coast to Europe.

Global diesel strength is showing up in prices at the pump for US drivers. The average retail diesel price has fallen 3.6% in the past month, compared with a 8.7% drop for gasoline, according to auto club AAA.

Diesel strength is also underpinning the so-called 3-2-1 crack spread, a measure of refinery margins for turning crude oil into fuel, at above $44 a barrel as of Friday. That is one reason refiners are running at near record rates in the US at a time when domestic gasoline demand has softened. Gulf Coast refiners operated at 98.1% of capacity last week, the highest since December 2018, according to US Energy Information Administration data.