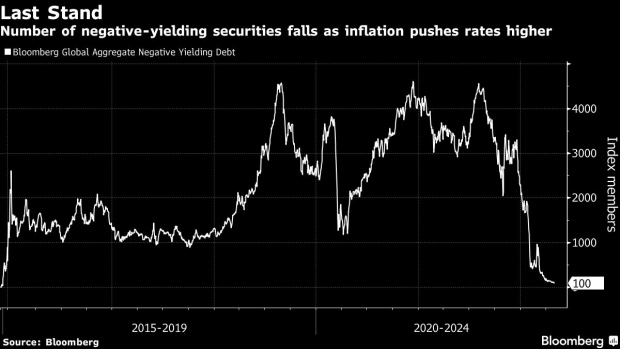 (Bloomberg) -- The negative-yielding bond is nearing extinction: there’s only 100 left in the world.

That’s down from over 4,500 such securities last year in the Bloomberg Global Aggregate Negative Yielding Debt index, following a surge in yields as investors bet on imminent interest-rate hikes. It signals the end of an era of getting paid to borrow and offers better returns from holding bonds.

In the euro area, which used to dominate the field with deeply negative yields due to the European Central Bank’s accommodative policies, only bonds maturing next year remain as traders prepare for rate increases as soon as July. Most of the ones left are from Japan, where the central bank is maintaining stimulus and keeping a lid on yields.

A bond produces a negative yield when the price investors pay for it is more than the interest and principal they’ll get back over its life. It runs against the investment norm that the party lending out cash should get a return. As recently as end-2020, the global stockpile of such securities stood at over $18 trillion. It is now around $2.5 trillion.

There is one last bastion of negative yields: inflation-linked bonds, whose rates account for future price increases, which are excluded from the Bloomberg index. Even those are falling in number. The so-called real yield on 10-year U.S. Treasuries has turned positive after spending over two years below zero.