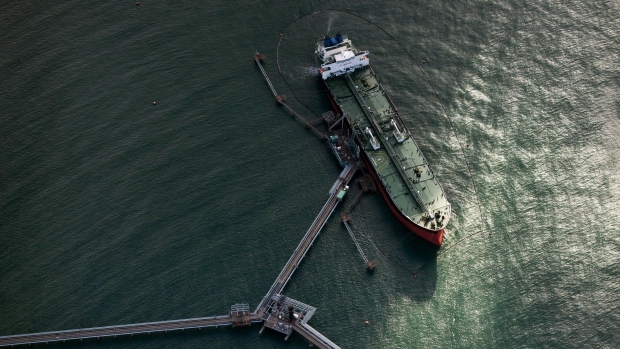 A tanker at the at the BP Plc Cherry Point Refinery near Blaine, Washington, U.S., on Friday, Nov. 19, 2021. Total U.S. oil stockpiles, including commercial inventories of crude and refined products, fell by the most in 11 weeks, dropping by 12.1 million barrels a recent U.S. Energy Information Administration report showed. Photographer: James MacDonald/Bloomberg , Bloomberg

(Bloomberg) -- For the first time in four years, there’s no US crude getting exported to France as a workers strike in the European country upends normal trade flows.

French workers are protesting for higher wages amid soaring inflation, and that’s snarled operations at key oil refineries. The chaos in the nation’s energy industry means that companies including Exxon Mobil Corp. and TotalEnergies SE have been forced to curtail or suspend their local operations. US oil producers normally see steady demand from French plants that take crude and process it into fuels like gasoline.

So far this month, there’s not been any American crude sailing to French ports, according to ship tracking data compiled by Bloomberg. If this keeps up, it would be the first time since September 2018 that no US oil was sent to France, said Rohit Rathod, a Vortexa analyst, wrote in an email.

The bitter irony is that the supply disruption could worsen the inflation that’s driven French workers to strike. Most countries in the region are rushing to secure oil supplies before the European Commission starts its next tranche of sanctions on Russia in December, which could mean further disruptions to energy trade flows to the continent. US crude drillers have been one of the key sources of alternative supplies.

Most of the US oil that didn’t ended up in France was rerouted to other European destinations. including Denmark and Italy, Rathod said.