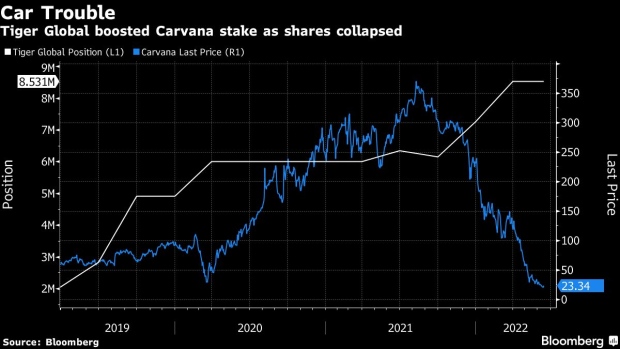 A Carvana Vending Machine location in Novi, Michigan, U.S., on Wednesday, Nov. 3, 2021. Hertz Global Holdings Inc., fresh off a blockbuster order for 100,000 Teslas, reached an exclusive agreement to supply Uber drivers with electric vehicles and signed up Carvana Co. to dispose of rental cars it no longer wants. , Bloomberg

(Bloomberg) -- Tiger Global Management has parted ways with Sam Harland, the partner responsible for the hedge fund’s bet on beleaguered used-car dealer Carvana Co., according to people with knowledge of the matter.

But the hedge fund’s investment in Carvana, which it ramped up in the six months through March, has drawn particular scrutiny. The Phoenix-based company’s shares have tumbled more than 90% from their peak in August, saddling Tiger Global and other hedge funds who bet big on the pandemic darling with steep losses.

Harland didn’t immediately respond to requests for comment, and a spokesperson for Tiger Global declined to comment on his departure.

Led by Tiger founder Chase Coleman, the hedge fund’s losses this year reached 52% as of the end of May. Carvana was Tiger Global’s eighth-largest position by market value as of March 31, according to a regulatory filing.

The New York-based firm began amassing its position in Carvana in early 2019. It added an additional 1.27 million shares in the first quarter, bringing its total position to 8.53 million shares, or an 8.1% stake, making it the third-largest public shareholder tracked by Bloomberg. Its average cost basis is $105.80, more than five times the $20.92 level the stock closed at on Tuesday.

Carvana, which soared in popularity during the pandemic as consumers turned to e-commerce, has gradually faced a reckoning as investors questioned its grow-at-all-costs strategy. It reported its first-ever sequential decline in quarterly retail sales in February and last month said it cut 2,500 employees in an effort to “better align staffing and expense levels with sales volumes.”

Harland was among the group of partners investing out of the firm’s $12.7 billion venture fund, known as PIP 15, according to data compiled by PitchBook.