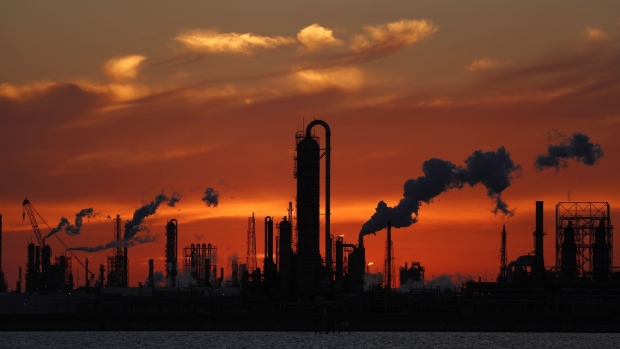 (Bloomberg) -- It may not be quite throwing caution to the winds, but the prospect of hefty profits and supply that may not stretch to meet consumer demand is enticing US refiners to run at a 21-month high, testing equipment limits to sustain high rates without breakdowns.

Gasoline stockpiles remain the lowest seasonally in seven years. A major breakdown when supplies are constrained by several years of closures that wiped out more than a million barrels of capacity could be disastrous. Stockpiles would shrink further and already high pump prices could surge higher, causing some drivers to curtail or reduce travel plans.

Some sites delayed maintenance to the fall and even to early next year to prevent shutting any unit vital to producing more fuel at a time when supplies are tight and profit margins are high. The risk: Running hard, particularly in summer heat, wears units down faster, reducing the time between turnarounds and increasing the cost of repairs when they do finally get taken down for maintenance.

Most immediately, high run rates risk abrupt breakdowns that could force a refiner to seek replacement products that cost more to buy than make. That would almost guarantee a spike in pump prices. Genscape’s Wood Mackenzie has reported multiple instances in June of crude units, gasoline-making FCC units and reformers that make high-octane gasoline blendstock suddenly reducing production with no maintenance planned or abruptly shutting down for a day or more.

“When the weather is hot, cooling tower efficiency is reduced and everything needs the cooling,” Campbell said.

In the week ended June 24, refinery runs were the highest since January 2020. Capacity utilization was 95%, highest since September 2019. East Coast and Gulf Coast oil processing plants ran at about 98%. Some refineries, according to people familiar with operations, are running above nameplate capacity to squeeze out every drop of product they can.

On the positive side, the pump price for a gallon of regular gasoline was $4.84 Thursday, according to AAA, down from a record $5.016 on June 13. Meanwhile, crude oil, which also influences gasoline prices, posted its first monthly decline this year in June. Contributing to the urgency to run hard while the market is favorable: US consumer spending fell in May for the first time in 2022 and prior months were revised lower.

“There’s risk when you run at the top of your engineering design rates and refiners know that,” said John Auers, executive vice president of Turner Mason & Co. in Dallas. “But the temptation is to test those limits in this margin environment.”

Gasoline demand and profit margins have softened slightly in the face of higher retail prices, while remaining strong enough to support high run rates. Refining margins, as measured by the 3-2-1 crack spread based on futures markets, are more than double a year ago, despite dropping to below $50 a barrel from $60 in early June.

“With these margins most refiners will run the risk of a breakdown,” Campbell said. “It would be strange if anyone were operating conservatively.”

Refiners’ strategies seem to be paying off. US independent refiners, including the largest and second largest -- Marathon Petroleum Corp. and Valero Energy Corp. -- are set to report their best-ever profits in the second quarter amid booming refining margins, according to analysts’ estimates compiled by Bloomberg.

The US summer demand season, which began on the May 28 start of the 3-day Memorial Day holiday weekend, hasn’t even peaked. The season kicks into high gear in July and August. A record number of drivers are set to travel U.S. roads for the upcoming July 4 holiday weekend, according to AAA’s forecast.

Refiners have a limited window of opportunity to maximize profits. A very active Atlantic hurricane season is expected, bringing the potential of lengthy production shutdowns at Gulf Coast refineries and also in the New York Harbor area. So far the season has produced two storms, the latest Tropical Storm Bonnie is in the Caribbean Sea.

“There’s not a lot of immediate answers on the supply side,” Auers said. “If we had a major event on the Gulf Coast that shut in capacity, you are talking empty tanks at the retail level.”