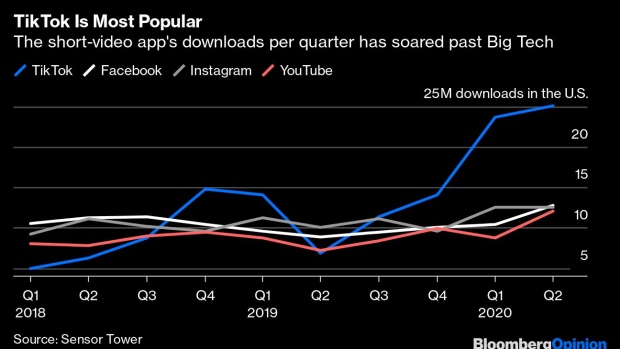 (Bloomberg Opinion) -- TikTok, the popular social-media app featuring do-it-yourself short videos, has also become one of the sore points in the growing frictions between the U.S. and China owing to its ownership by Beijing-based ByteDance Ltd. In recent weeks, White House officials from Secretary of State Mike Pompeo to President Donald Trump have even raised the possibility of banning or otherwise restricting TikTok, citing data-privacy and national security concerns the company denies.

Does a move to outlaw TikTok make sense? So far, the government hasn’t presented any clear evidence laying out its privacy concerns about the app. And unlike Huawei Technologies Co., another targeted Chinese company whose telecommunications equipment routes critical data traffic for wireless carriers and enterprises, TikTok is used mostly by everyday Americans to share dancing, lip-syncing and funny pet videos. The two firms are worlds apart. Still, with tensions rising by the day — including the U.S. move this week to shut down the Chinese consulate in Houston and China’s vow to retaliate — it’s hard to dismiss the threat entirely as political bluster. And so it’s worth giving a thought to what’s at stake in a potential ban of TikTok, and what the consequences of shutting down such a widely used app might be.

Clearly, the move would have a chilling effect on any Chinese-owned tech firms operating in the U.S. It also could trigger backlash for U.S. companies with operations in China. Most of all, it would upend the U.S. social media landscape by eliminating one of its fastest-growing platforms, and one that has carved out a unique niche.

All the major platforms have different origin stories that permeate how the sites work even today. TikTok is no different. Facebook, for instance, was originally built around text-based social networking and messaging. Instagram has dominated the move toward sharing photos and images through a scrollable feed, while YouTube is the internet’s repository for longer-form videos with an interface anchored around a search engine. In contrast, TikTok’s core focus is short 15-to-60-second videos and its ability to surface the most-relevant entertaining content to each user.

For many social-media influencers and celebrities, it’s not a question of choosing between platforms, but rather knowing which content to put on each. Many TikTok creators already cross-post their TikTok videos on Instagram and YouTube, but the same short-form videos get much more traction on TikTok from its better personalization algorithm for video content. A world without TikTok would mean less exposure for these stars, but not necessarily loads of new content for TikTok competitors such as Facebook Inc. or YouTube parent Google.

Not that rivals are sitting still. Facebook has launched a new TikTok-like “Reels” feature in some international markets, and it’s reportedly set to appear in the U.S. Instagram app in the near future. This will pose more of a direct threat, for sure. But such bolt-on offerings may not gain as much traction as the original because they lack focus and often require extra cumbersome steps. Whatever happens, Instagram’s home page will still be centered around a scrollable feed of images. But do expect Facebook and others to keep trying.

The numbers show surging demand for TikTok’s pure-play short-video platform. Sensor Tower data shows that downloads of the app have soared past its competitors over the last three quarters as more and more Americans take to TikTok as the perfect escape for turbulent times. In another milestone, Netflix added TikTok to its short list of competitors for the first time in its letter to investors last week, saying the app’s growth was “astounding.”

But even more important than the numbers on users or downloads, perhaps, is the fact that TikTok users are becoming more addicted to the service. On Monday, Citi Research analyst Nicholas Jones said in a note to clients that the average TikTok user spent 476 minutes on average on the app in March, the most recent period for which data is available, resulting in the largest increase in time spent among the major platforms since October. TikTok is also now in second place overall, just behind Facebook’s 564 minutes.

Instead of the major social media sites, a TikTok ban would likely benefit the smaller apps that are focused on the short-video category, including Byte App and Dubsmash. This pattern is what happened in India, where the video-focused apps such as Roposo thrived, adding millions of users in days, after the country’s ban of TikTok last month. At the end of the day, the strong demand for short-form video apps looks to be a resilient, enduring trend.TikTok also seems to be exploring ways to address the U.S.’s concerns. On Tuesday, The Information reported that ByteDance’s current American investors have started preliminary discussions with the company about buying a majority ownership in TikTok. Further, the Wall Street Journal said earlier this month ByteDance was considering the creation of a new management board, in addition to designating a new headquarters outside of China for TikTok.

If an acceptable solution is found for both sides, millions of TikTok users will be able to breathe easy. Not so the other American social-media giants, until they find their own answer for the surging TikTok juggernaut, or somethng else comes along.