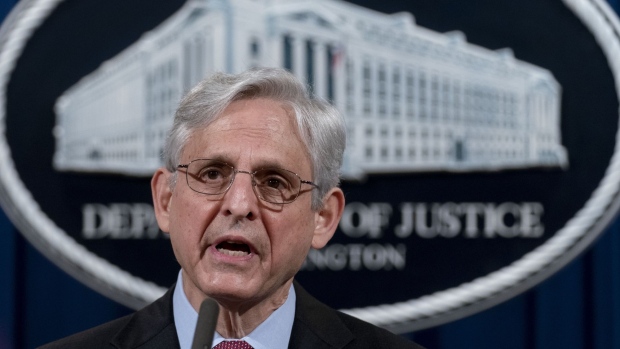 (Bloomberg) -- Attorney General Merrick Garland is rapidly approaching a choice likely to shape American politics and the boundaries of law enforcement for decades: whether Donald Trump will be the first former US president charged with a crime.

Garland has nothing but hard choices. The nation is split, a bare 47% to 43% plurality backing criminal charges for mishandling classified documents, according to a Aug. 29-Sept. 1 Marist poll. Trump, who is mulling another run for the presidency in 2024, is already openly raising the possibility of dark consequences in the event of an indictment.

Asked last week by conservative radio host Hugh Hewitt whether he would be indicted, Trump said, “If it happened, I think you’d have problems in this country the likes of which perhaps we’ve never seen before.”

The Justice Department likely already has the evidence that would support indicting Trump for obstructing a federal grand jury investigation into his handling of classified documents, current and former officials said. The probe into whether he compromised sensitive national secrets is also moving swiftly, potentially setting up a prosecution decision after the Nov. 8 midterm elections. But a sprawling investigation into Trump’s efforts to overturn the 2020 election likely will take a lot longer.

Any decision by Garland, 69, a former federal appeals court judge known for his by-the-book approach, is sure to stoke political passions in the coming presidential race and set a precedent for whether criminal law extends to presidents. Public confidence in the US justice system is at stake. The prospect of violence looms.

“We don’t want to look like a banana republic, where, when people are out of office, they’re prosecuted by their successors,” said former Trump Attorney General William Barr.

Conversely, since the Justice Department already has decided a president can’t be charged in office, it raises the question of whether presidents effectively would be placed above the law if they committed criminal acts out of office and weren’t prosecuted.

“You can’t have a situation where someone who has been a president is immune,” said Jamie Gorelick, former deputy attorney general under Bill Clinton.

High-profile top government officials have already been prosecuted for mishandling classified documents, including former National Security Adviser Sandy Berger and former CIA Director David Petraeus, both of whom pleaded guilty. Each paid a hefty fine -- Petraeus $100,000 and Berger $50,000 -- and were on probation for two years. As of now, it’s unclear what damage the documents in Trump’s possession may have allegedly caused.

The Justice Department’s review before bringing charges against a former president will be extraordinary. Such a prosecution decision “is weightier” than most, Gorelick said. “You just have to be more thoughtful and careful.”

The University of Chicago’s Project on Security and Threats estimates 18 million Americans believe a violent response would be justified if Trump were charged with mishandling classified documents, based on a poll taken Sept. 9-12. The researchers extrapolated the estimate from their survey, which found 7% of respondents agreed with that statement in a poll of 2,142 adults contacted by web and telephone. The margin of error is 2.9 percentage points.

Barr said Garland should try to put out of his mind the potential for violence when deciding how to proceed.

An indictment is sure to divide the country. Merely seizing documents from Trump’s estate unleashed furious criticism from Republican politicians and threats of violence against the FBI. The backlash against criminal charges could be far more heated, especially as the campaign for the GOP presidential nomination begins in earnest next year. Some 78% of Republicans opposed prosecution and 63% of Republicans said in the Marist poll that Trump has done nothing wrong. The Marist poll of 1,236 adults contacted by telephone Aug. 29 through Sept. 1 has a margin of error of 4.1 percentage points.

The more the case becomes a partisan cause, the harder it may be for a jury to reach a unanimous verdict. A failed prosecution carries extra risk for the Justice Department’s long-term reputation, not to mention the standing of Garland and his boss, President Joe Biden.

An indictment -- even a conviction -- also won’t necessarily stop Trump from another run for the White House. And the criminal case could well drag on to become a sideshow in the presidential campaign.

Even if Garland determines he has enough evidence to prove Trump guilty beyond a reasonable doubt -- the standard the Justice Department usually uses for criminal charging decisions -- he does have prosecutorial discretion to not pursue the case if that would be in the public interest.

“There is no question that prosecutorial discretion can consider the political or social upheaval that a case may cause,” said Jonathan Turley, a law professor at George Washington University. “It is part of the balancing with the need to show that no one is above the law.”

More immediately, a decision not to prosecute would provide fodder for Republican claims that the Aug. 8 Mar-a-Lago search amounted to nothing more than Justice Department and FBI harassment of Biden’s most prominent political opponent.Read More: Trump Search One of Several Potential Criminal Probes He FacesEven if Garland doesn’t indict Trump in relation to the secret documents, Trump still faces a number of other, potentially more serious, investigations that could lead to criminal charges, including a lawsuit by New York Attorney General Leticia James on Wednesday, accusing Trump of fraud in overvaluing his real-estate assets in the state. Conversely, if he doesn’t prosecute Trump in the records case, it sends a message that presidents can break the law with impunity.

Garland could wait on making a charging decision while the Justice Department proceeds with its investigation into whether Trump and his allies illegally attempted to overturn the results of the 2020 election. There is also a separate investigation into election-related actions by a special grand jury in Fulton County, Georgia, featuring a recorded call from the former president to the state’s secretary of state asking him to “find” more Trump votes.

Waiting for a more serious charge like trying to overturn an election could weaken the argument that the charge wasn’t worth the historic prosecution of a former US president. Some have argued that such a prosecution should be for a charge more egregious than mishandling even top secret records.

“These violations are rarely prosecuted and those relatively few cases have not generated significant sentences,” Turley said.

But there are risks to waiting. Federal investigators are still gathering evidence about actions Trump and his allies took regarding the Jan. 6 violence, fake elector schemes and other efforts to overturn the 2020 election, meaning any charging decisions aren’t expected anytime soon.  It could press up against voting in the next Republican presidential primaries, in which Trump may be a candidate.

The Justice Department normally makes prosecution decisions on a criminal case even when a defendant may be under investigation for another offense.

Garland has been reluctant to speak publicly about the challenges he and his department face. But he urged allegiance to the rule of law during a speech on Saturday to welcome new US citizens.