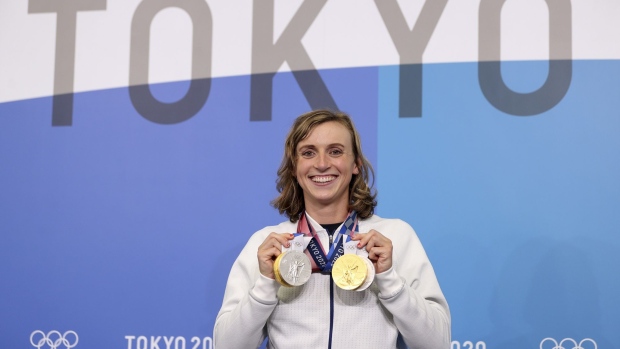 (Bloomberg Law) -- As the Olympic flame goes out in Tokyo on Sunday, marking the end of the 2020 Games, swimming phenom Katie Ledecky and pole vaulting sensation Katie Nageotte will both be leaving with gold.

A hefty tax bill awaits back in the U.S., but only for one of them.

Ledecky, now the most decorated female swimmer of all time, likely owes the U.S. government about $44,000 from her two gold and two silver medal wins. That estimate is based on her lucrative corporate sponsorships and the prize money attached to her medals.

Nageotte, who won gold in women’s pole vaulting, likely won’t pay any taxes on her winnings, thanks to a special exemption for those with more modest financial success.

“The men’s basketball team isn’t going to be excluded, but a good majority of Olympians will be,” said John Karaffa, president of ProSport CPA PLLC, a Virginia-based tax and accounting firm who said he represents more than two-dozen Olympians.

Olympic medals don’t have much intrinsic value, fluctuating from up to $700 for a gold to about $5 for a bronze, depending on the market prices of their component metals. But that isn’t the focus of the Internal Revenue Service. Rather, it’s the prize money the United States Olympic & Paralympic Committee awards its medalists, which for the 2020 Tokyo Games is:

Winnings are treated as income for federal tax purposes, under Section 74 of the Internal Revenue Code. For top-earning athletes like Ledecky, who makes over a million dollars a year in endorsements according to a report in the Washington Post, total prize money is subject to the top-marginal tax rate of 37%.

Nageotte, on the other hand, is spared paying tax by an Obama-era law (H.R.5946) that exempts athletes making less than $1 million in total income after deductions from the so-called “victory tax.”

“Income earned by an American citizen, even if its in Timbuktu, is income on your U.S. tax return,” said Conrad Teitell, a principal with Cummings & Lockwood in Stamford, Conn. “Many other countries don’t tax income earned while in a foreign country.”

Nageotte has refuted what she says are “extremely inaccurate” estimates of her net worth, saying pole vaulting hasn’t made her rich. Of course, her tax status could change after she won gold.

“For some of these athletes, their success during this year’s games will determine the endorsements they’ll earn, whether or not they’ll have income over $1 million for this tax year,” Karaffa said.

Professional athletes in the U.S. typically owe taxes to the jurisdictions in which they compete, like for road games and mandatory off-season workouts in out-of-state facilities. Countries hosting major international tournaments, though, often exempt non-resident competitors.

“In Japan, it is legislated as a special tax treatment that the prize award given to non-resident athletes participating in the Tokyo Olympics/Paralympics is exempt from Japanese taxation,” said Yoshihisa Kita, first secretary of finance for the Japanese Embassy in the U.S.

Some countries—particularly those starved for Olympic success—offer their athletes much greater rewards. Singapore, for example, pays gold medalists 1 million Singapore dollars (U.S. $740,000)—for a first-time win.

Unfortunately for foreign athletes with U.S. residency, there is no exemption.

“The law is very specific,” Karaffa said. “The exemption is only for prize money received by the U.S. If somebody earns less than a million, but got money from the French Basketball Association, that money is fully taxable.”

To contact the reporter on this story: Sam McQuillan in Washington at smcquillan@bloomberglaw.com