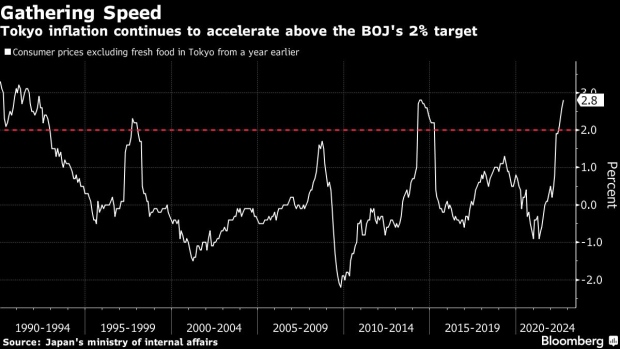 (Bloomberg) -- Inflation in Tokyo accelerated for a fourth consecutive month to rise at the fastest pace since 1992 excluding the impact of tax hikes, and adding to the challenges for the Bank of Japan in communicating its need for inflation-supporting easing.

Consumer prices excluding fresh food rose 2.8% in the capital in September, according to the ministry of internal affairs Tuesday. The gain matched economist forecasts.

The growth in Tokyo prices was led by gains in processed food and durable goods, with the former jumping the most in 41 years. Energy’s impact on prices was slightly less compared to the previous month.

Tokyo data is a leading indicator for nationwide inflation, and if gains are similar for the country overall, inflation could reach 3% in September.

The faster pace of price growth likely won’t prompt the BOJ to tighten its policy when it meets later this month. Governor Haruhiko Kuroda, whose term is set to end in April, has repeatedly said an interest rate hike won’t take place in the near future. He argues the current cost-push inflation will wane eventually without robust wage growth, and the bank needs to keep up its monetary easing to support the economy.

Still, Tuesday’s data puts inflation in Japan’s capital above the BOJ’s 2% target for a fourth consecutive month. As price gains accelerate toward 3%, Kuroda will come under more pressure to explain why he thinks these increases are temporary, especially as gains are spreading beyond energy prices.

“Energy remains a strong driver, but the impact of food is getting bigger,” said Nobuyasu Atago, chief economist at Ichiyoshi Securities and a former BOJ official. “The BOJ won’t raise interest rates, but it faces a daunting communication challenge to explain why it is maintains its policy.”

The BOJ’s latest summary of opinions already shows that board members’ views on the economy and inflation are evolving, a development that will likely fuel further speculation of an eventual policy shift.

“Looking ahead, we see Tokyo’s core inflation (ex. fresh food) hitting 3% in 4Q and then easing in 1Q 2023. A weaker yen will probably lift prices of processed foods and other imports, particularly in October.”

Analysts expect the economy to keep growing in the third quarter, although at a slower place than in the three months ended June, when it regained its pre-pandemic size. The BOJ’s latest Tankan survey of business sentiment shows firms are increasingly seeing higher levels of inflation for the medium term, a factor that may choke their profitability and hurt consumption.

September also saw the yen weakening beyond 145 versus the dollar for the first time in 24 years. The rapid slide in the yen, fueled partly by Kuroda’s dovish policy stance, has made imports of energy and food more expensive. It was also followed by Japan’s first currency intervention to prop up the yen in nearly a quarter of a century.

In October, inflation is also poised to take a boost from a further fading of last year’s cheaper mobile phone fees and a jump in the number of businesses raising prices. The prices of 6,532 food items are expected to increase in October, according to a Teikoku Databank survey. That compares with 2,424 items in September.

To fight the ongoing price gains Prime Minister Fumio Kishida has extended relief measures and ordered a new economic stimulus package to be compiled by the end of this month, funded partly by another extra budget. Higher inflation may put pressure on Kishida to compile a bigger package.

Existing programs like gas subsidies have already kept a lid on price growth, and Kishida’s promises of a new program to limit electricity price gains is also likely to have an impact on inflation. Energy still accounts for almost half of price growth, with electricity contributing the largest part of the gains.

The government’s intention to limit electricity price increases and hone in on the benefits of the weaker yen suggests that they’re still solidly behind the BOJ.

“People’s feelings about prices are dictated by items directly tied to their living like electricity and food,” said Ichiyoshi’s Atago. “Inflation can reach 3% in October with the prices of many food items going up. 3% is a big milestone in terms of policy implications.”