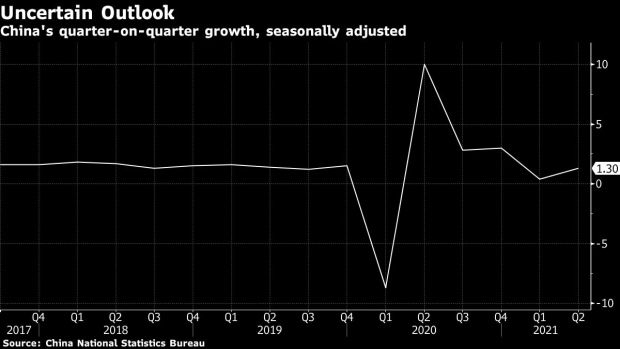 Shoppers and pedestrians walk along Nanjing Road in Shanghai, China, on Sunday, June 6, 2021. Consumers in China remain cautious even though the Covid-19 outbreak has been under control for much of the past year. Photographer: Qilai Shen/Bloomberg , Bloomberg

(Bloomberg) -- China’s tough virus curbs mean economic activity in the third quarter could be close to flat compared with the previous three months, while full-year growth may fall below 8%, a top forecaster said.

“My view is that the Chinese economy should slow sharply in the third quarter, mainly due to the virus but also controls on property,” said Christophe Barraud, chief economist at Market Securities LLP. Barraud was Bloomberg’s top-ranked forecaster for the Chinese economy last year.

Barraud’s prediction of 0.3% growth in the July-September period from the previous three months is below the median estimate of 1.1% in a Bloomberg survey of economists. He is also bearish on China’s growth for 2021 compared to the market’s median estimate of 8.4%.

“It should be close to 8% but with risks tilted to the downside,” he said. “If there is another outbreak in the fourth quarter, forecasts should be adjusted below 8%.” The government has set a target of above 6% growth for the year.

China introduced tougher new curbs on travel to squash an imported outbreak of the delta virus variant from late July. While the measures quickly brought the virus under control, a new cluster has developed in southern China this month, suggesting some restrictions will remain and consumers will continue to be cautious.

“Risks are tilted to the downside because China will keep implementing a zero-tolerance policy concerning Covid-19, particularly ahead of the Winter Olympics in February,” Barraud said.

The France-based economist said one of his favorite indicators of Chinese economic activity at the moment is the daily number of domestic flights.

“It’s the most reliable data to catch the impact of restrictive measures,” he said.

China is scheduled to release third-quarter gross domestic product data on Oct. 18. In the second quarter, GDP rose 7.9% from the same period in 2020, and 1.3% from the previous quarter.

Barraud said his forecasting technique involves trying to collect as much data as possible, including from private providers, before constructing a simple model with just five inputs for each predicted economic variable. Those forecasts are adjusted based on experience and comparison with competitors, he said.

For the remainder of the year, infrastructure investment and fiscal spending will be key variables indicating the extent to which Beijing is trying to support growth, he said.

The focus could be more on public investment “because everyone is waiting for public support,” he said.