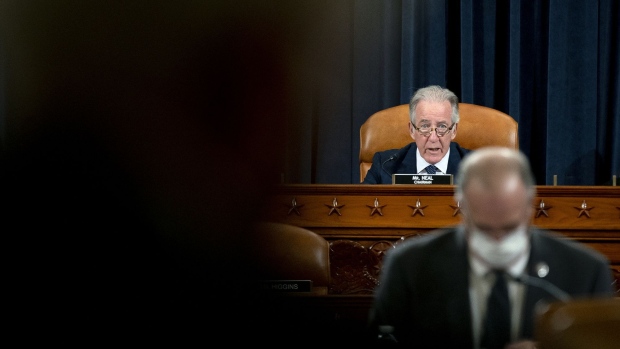 Representative Richard Neal, a Democrat from Massachusetts, speaks during an America COMPETES Act Of 2022 event at the U.S. Capitol in Washington, D.C., U.S., on Friday, Feb. 4, 2022. The House is forging ahead on a bill that would invest tens of billions in the U.S. tech sector, but Republican objections that it's too weak on China threaten what Democrats hoped would be a quick election-year win. , Bloomberg

(Bloomberg) -- House Ways and Means Chairman Richard Neal said Democrats should prioritize free-trade negotiations with Europe if they’re able to maintain their hold on Congress after the November midterm elections.

“On the European side, there’s 500 million consumers,” Neal told Bloomberg News during an interview in Geneva. “We want to sell our goods there.”

The $1.1 trillion transatlantic trade relationship is the world’s largest bilateral economic exchange, and US trade with the European Union’s 27 members currently takes place on non-preferential terms established at the World Trade Organization.

Neal acknowledged Europe’s concerns but said it shouldn’t preclude the US from negotiating a trade agreement with the bloc. “I defend it, I thought was a great piece of legislation.”

The US-EU Transatlantic Trade and Investment Partnership, known as TTIP, faltered after former President Donald Trump was elected in 2016 and Joe Biden’s administration has spent much of its first two years winding down Trump’s trade war with Europe.

Biden’s top trade official, Katherine Tai, ended Trump-era tariffs on European steel and other bilateral trade worth billions of dollars and prioritized transatlantic regulatory harmonization under the aegis of the US-EU Trade and Technology Council.

Neal said the US-Canada-Mexico free-trade agreement could provide a template for the US to reboot discussions with Europe. “I’m going to keep saying do what we did with USMCA -- labor rights, human rights, climate considerations, economic parity for those people that have not been part of growth,” he said.

“You can do the same thing with TTIP and build some confidence to get to” the Trans-Pacific Partnership, the 11-nation agreement known as TPP that Trump withdrew from on his first day in office. The Biden administration has not sought to rejoin the TPP and it recently launched the Indo-Pacific Economic Framework, a 14-member negotiation that does not include new market access terms.

Neal also pushed for the administration to engage Kenya in a free-trade agreement, which he said would find ”broad support” on both sides of the aisle in Washington.

“We find it desirable” to reach a pact with the East African nation, he said. “We want some entry into Africa for a lot of different reasons, not the least of which we think that it could be a valuable partner in democracy as well as economic policy.”

This summer, Tai rebranded her predecessor’s bilateral negotiations with Nairobi as the US-Kenya Strategic Trade and Investment Partnership, which prioritizes technical cooperation on regulations rather than increasing market access via tariff negotiations.

Neal bemoaned the shifting tide against globalization in the US, which became a punching bag under Trump and has been repeatedly criticized by Tai for failing to equitably spread the benefits of economic growth.

“We’d like to also figure out how we might resurrect a constituency for trade,” Neal said. “Now it’s faltering. The term globalization was pretty chic 25 years ago, 30 years ago. But the reality is that the world is going to continue to globalize; it’s just a matter of how the goods are distributed.”