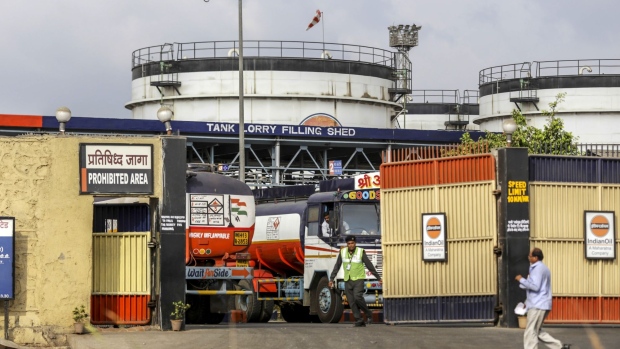 (Bloomberg) -- India’s biggest oil refiner says fossil fuels will continue to be key part of the nation’s energy mix as it embarks on a $13 billion expansion.

Indian Oil Corp. plans to increase its crude processing capacity by a third over the next five years to increase production of gasoline and diesel, along with petrochemicals, Chairman Shrikant Madhav Vaidya said in an interview. That will give the company the capability to refine 2.15 million barrels a day.

The big bet by Indian Oil will help meet an expected increase in the nation’s energy consumption, although it contrasts with a notable shift from fossil fuels by some other key crude consumers. That includes local rival Reliance Industries Ltd. -- operator of the world’s biggest refining complex -- which last year signaled a move toward cleaner alternatives from gasoline and diesel.

“I firmly believe all forms of fuel will have a place to stay -- fossil fuels will be there,” said Vaidya. “There’s going to be demand for whatever we invest in. Consumption is going from leaps and bounds and energy security is the primary concern for me, which may not be the concern to the developed world.”

The International Energy Agency predicted last year that India’s oil use growth would surpass that of China in the mid-2020s and make it an attractive market for refinery investment. Russian oil producer Rosneft PJSC already has a foothold in the country after its purchase of refiner Essar Oil Ltd. -- now known as Nayara Energy Ltd. -- while Saudi Aramco is seeking to buy a stake in Reliance’s oil-to-chemical business.

Indian Oil is taking some steps toward a greener future, however. The refiner is experimenting with the use of hydrogen for transport, it’s blending more ethanol with gasoline, investing in battery technology and has plans to power all the new units at its refineries with renewable power.

“We are investing in solar and wind energy in a big way, we can use the grid to transmit that power to our plants,” Vaidya said.