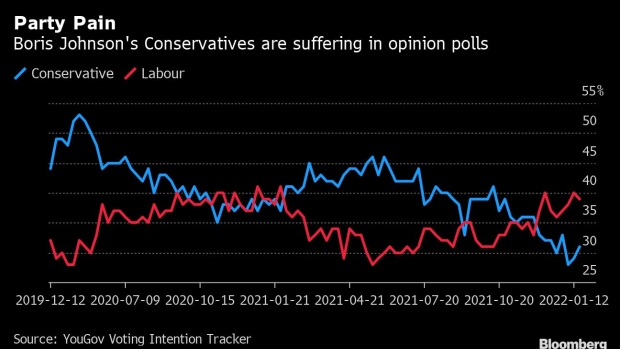 (Bloomberg) -- Boris Johnson’s supporters say the launch of a police inquiry into alleged breaches of pandemic rules in Downing Street has led prospective Conservative rebels to hold off any bid to oust the prime minister for now.

London’s Metropolitan Police on Tuesday announced the probe into events held in Johnson’s office during the pandemic, escalating a crisis that has left him fighting for his political survival.

While on the face of it, a criminal investigation makes matters worse for the premier, in the short term, some Tory members of Parliament said they detect a calming of the mood in their party. The police process is likely to take longer than the ongoing civil service probe that’s expected to conclude this week, providing temporary respite for Johnson from internal party pressures.

Several rank-and-file Conservatives told Bloomberg they would wait for the police to publish their findings before deciding if a change of leadership is required. They also said the outcry over alleged partying has become overblown, when the focus should be on issues including tension with Russia and the cost of living.

Speaking in the House of Commons, Johnson himself played down the threat from the police probe, saying it would “give the public the clarity it needs and help to draw a line under matters.” Earlier, his spokesman said the prime minister doesn’t think he has broken the law.

Even so, the picture could change rapidly. While the police probe will take time, Johnson is also braced for the imminent publication of an internal inquiry by senior civil servant Sue Gray into the party allegations.

The Partygate Scandal: What Boris Johnson Has Said So Far

Amid widespread speculation that the internal report will be published Wednesday, a person familiar with the matter said it would be made public this week, declining to speculate on its contents.

There was considerable confusion on Tuesday over what Gray’s report would cover given the police probe that is now underway. Johnson’s spokesman, Max Blain, told reporters it would now cover only the allegations that the police had chosen not to investigate, though he later said there are still talks taking place between officials and the police.

The furor over the alleged parties has rocked Johnson’s premiership and caused his Tory party to slump in the polls. The latest YouGov survey published Tuesday said 62% of Britons now think Johnson should resign. A Savanta ComRes poll put the proportion even higher, at 67%.

The issue has dominated the political discourse for weeks, tapping a sense among voters that Johnson and his team didn’t adhere to the coronavirus restrictions they set for the rest of the country. Anger has mounted over reports of partying in Downing Street, contrasting with the birthdays and funerals the general public couldn’t attend.

Reports that Johnson’s staff held two leaving parties on the eve of Prince Philip’s funeral proved especially sensitive. The prime minister was forced to apologize to Queen Elizabeth II. The latest revelation on Monday led to Johnson’s office confirming staff had gathered in Downing Street to celebrate his birthday during the first lockdown in 2020.

But Johnson’s MPs are the critical constituency if he is to stay in office: he would face a no-confidence vote if 54 of them -- 15% of their the total -- submit letters calling for his resignation. He would then need the support of more than half of his party to survive.

In the House of Commons, there was no sign of the 54 threshold being reached, with rank-and-file Tories putting on a strong show of support for his statement on the tensions with Russia over Ukraine.

“When Europe stands on the brink of war and there’s a cost of living crisis, can we please have some proportion about the prime minister, being given a piece of cake, in his own office, by his own staff?” veteran Tory MP Edward Leigh said.