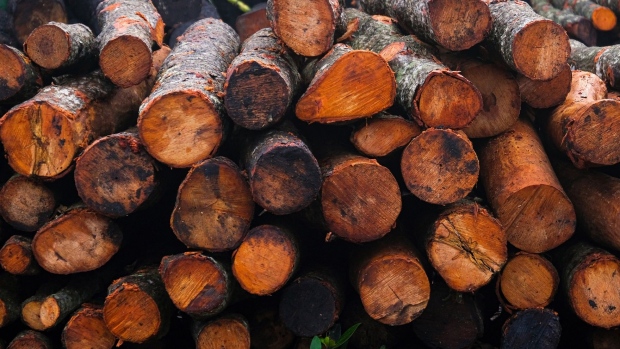 Mangrove logs dry outside a traditional mangrove charcoal factory in Kuala Sepetang, Malaysia, on Wednesday, Feb. 9, 2022. Malaysia said its economy returned to expansion at the end of 2021 amid easing pandemic restrictions, while flagging risks for this year from inflation, further virus disruptions and global growth. , Bloomberg via Getty Images

TotalEnergies, which has been pumping oil in the central African country for more than 80 years and is its leading fuel retailer, said it is joining forces with CBG to develop a new forest management model that combines wood harvesting and processing in south-west Gabon with the production of carbon-offset credits. The size of the acquisition wasn’t disclosed.

“Forestry is a key economic sector for the country and we will help develop its carbon sequestration capacity,” Nicolas Terraz, president of oil exploration and production at TotalEnergies said in a statement on Wednesday.

Carbon offsets are tokens representing a ton of climate-warming carbon dioxide that is reduced, removed or not added to the atmosphere, and companies use them to compensate for their emissions. Offsets can be traded on the $1 billion international market or firms can invest in projects to produce them themselves.

The poor quality of many available offsets has invited skepticism from scientists, activists and businesses alike, and the leading United Nations-backed industry standard setter, the Science-based Targets initiative, says they cannot count toward credible decarbonization plans.

TotalEnergies and CBG plan to generate offsets from reducing the impact of forest operations, reforestation, agroforestry and forest conservation, TotalEnergies said. CBG has control over 600,000 hectaresa (1.48 million acres) of forest, representing about 2.6% of land area in the world’s second-most forested nation.

“Forests are of crucial importance in the fight against climate change,” said Hubert and Guillaume Fenart, CBG’s co-chief executive officers. “The arrival of a major player like TotalEnergies will make it possible to expand CBG’s activities and develop large-scale carbon initiatives.”

The project sits within TotalEnergies’ climate action strategy, which foresees an annual expenditure of $100 million on such initiatives to generate at least 5 million carbon credits a year by 2030, the company said. These credits will be used after 2030 to offset part of the firm’s emissions. TotalEnergies is already using carbon offsets to market what it calls “carbon neutral” cargoes of liquefied natural gas, a Bloomberg investigation revealed last year.

In Gabon, the project fits within the government’s sustainable natural resource development strategy, “Green Gabon”, and its climate plan.

Gabon “is looking to find a development strategy that maintains the forests,” Environment Minister Lee White said in an interview last year. “We’re trying to push the idea, rather than pay us for reducing emissions, pay us for absorbing emissions.”

Bloomberg was unable to immediately reach a Gabonese government representative for comment.

“Such a deal between an oil company and a forestry company is a first in Gabon,” said Marc Ona Essangui, executive secretary of Gabonese environmental NGO Brainforest and president of non-profit network, Environment Gabon. “We’ll take a close look at the added value in terms of governance and sustainable forest management, and the rights of local populations must be respected,” he said.

The Gabonese government has partnered with another private firm, African Conservation Development Group, on a similar project covering 700,000 hectares of forest in south-west Gabon.