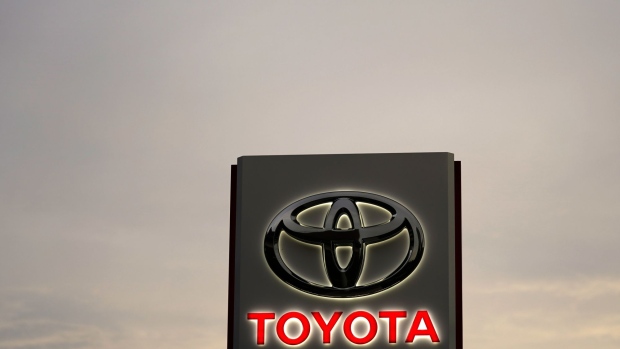 Toyota Motor Co. signage is displayed outside a dealership at dusk in Tokyo, Japan, on Sunday, May 10, 2020. Global automakers and suppliers are on track to get at least $100 billion of bank financing as the coronavirus pandemic hammers car sales. Photographer: Toru Hanai/Bloomberg , Bloomberg

(Bloomberg) -- Toyota Motor Corp. is cutting its February production by around 20% due to chip shortages, the Nikkei newspaper reported Tuesday, though that output target is still up from a year earlier.

The world’s top-selling automaker plans to assemble 700,000 units in February, down 200,000 from its original goal for the month, Nikkei reported Tuesday without citing a source. That compares with 668,001 units Toyota produced in the same month a year earlier. A spokesperson for Toyota declined to comment on the automaker’s future production targets.

Toyota is pushing to ramp up production to make up for lost output last year during the peak of supply chain disruptions. With a goal of churning out 9 million vehicles for the fiscal year ending March, Toyota had announced plans to produce 800,000 vehicles this month, up from the number of units it shipped the same month a year earlier.

At the same time, pandemic-induced supply chain disruptions are proving persistent. In mid-December, Japan’s auto parts trade group warned that a dizzying number of issues are impacting procurement of parts and materials. Those included lingering production issues in Southeast Asia, where rising Covid cases are once again impairing the region’s output of semiconductors.

Toyota will suspend some production at its Tahara plant, in Aichi Prefecture in addition to other locations, the Nikkei reported. To meet its 9 million car goal for the fiscal year, Toyota would have to produce a record 1 million cars in March, according to the Nikkei.