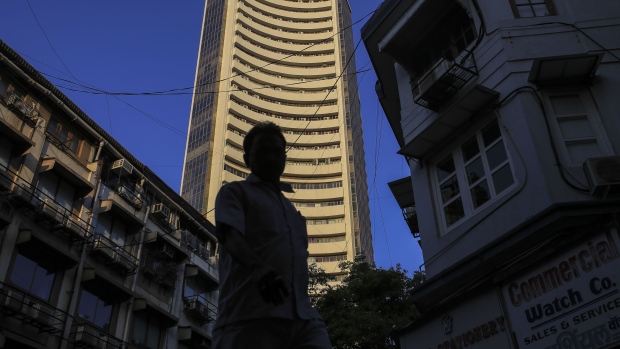 A pedestrian is silhouetted as the Bombay Stock Exchange (BSE) building, center, stands the background in Mumbai, India, on Tuesday, Dec. 11, 2018. India’s new central bank governor has a list of challenges to face as he takes office: from fixing a banking crisis to convincing investors of the institution’s autonomy. , Bloomberg

(Bloomberg) -- TPG Capital has paused a sale of its stake in privately-held Indian financier Shriram Capital Ltd. as the country’s lingering shadow banking crisis hurts valuations, according to people with knowledge of the matter.

The private equity’s plan to sell its 10% stake has been held back, and will likely resume only as soon as the next financial year starting in April, said one of the people, who asked not to be identified as the information is private.

In August, five foreign investors, including Blackstone Group Inc and Carlyle Group LP, were shortlisted for talks to acquire a combined 30% stake in Shriram Capital from Piramal Enterprises Ltd. and TPG. The sellers were seeking a valuation of 80 billion rupees ($1.1 billion) for the stake, people familiar with the matter have said.

The halt came as debt concerns spread at Indian lenders including Indiabulls Housing Finance Ltd. and a regional bank. Last week, the Reserve Bank of India had to reassure investors that the banking system is “safe” after depositors lined up to pull money from a small Mumbai-based bank.

Deliberations are ongoing, and TPG could restart a sale when appropriate, the people said. A Mumbai-based representative for TPG declined to comment.

To contact the reporter on this story: Baiju Kalesh in Mumbai at bkalesh@bloomberg.net

To contact the editors responsible for this story: Fion Li at fli59@bloomberg.net, Anto Antony