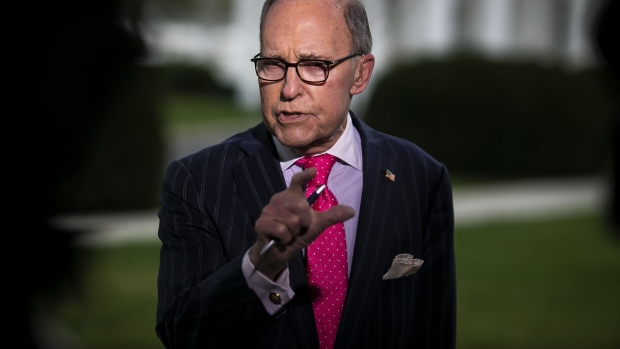 President Donald Trump is headed for a showdown with America’s allies at a Group of Seven summit this week in Quebec, with the European Union and Canada threatening retaliatory measures unless he reverses course on new steel and aluminum levies.

China, while open to talks to resolve the dispute, is warning it will withdraw commitments it made on trade if the president carries out a separate threat to impose tariffs on the Asian country. While China doesn’t want an escalation in trade tensions, it will defend its core interests, according to a commentary published Monday by the state-run Economic Daily.

Trump changes his mind often enough that U.S. allies and rivals alike hope he’ll do just that on tariffs in the next few days. An all-out trade war may become unavoidable if he doesn’t.

The White House appeared unfazed by threats from allies. Top economic adviser Larry Kudlow said Canadian Prime Minister Justin Trudeau was “overreacting” in response to the tariffs, and said the blame for any escalation lies with the U.S.’s trading partners. He said Trump is simply responding to decades of trade abuse.

Investors in Asia appeared little rattled by the talk of war, with stock markets in Japan, China, Australia and South Korea all up in trading on Monday.

The metal tariffs imposed on the European Union and Canada are the latest escalation by the U.S. on the trade front that has roiled financial markets for months and prompted the International Monetary Fund to warn of a trade war that could undermine the broadest global upswing in years.

Finance chiefs from the group of wealthy nations emerged from three days of talks on Saturday “unanimous” in their condemnation of Trump’s decision to impose tariffs on steel and aluminum, promising to press ahead with retaliatory measures unless Trump steps back.

It was a rare rebuke of a member nation by the group that foreshadows high drama when Trump meets leaders of the other six major industrialized nations Friday at a summit in the Quebec resort town of Charlevoix, near the border with Maine.

Trump, for his part, spent time during his weekend retreat at Camp David tweeting that “stupid trade” could “no longer be tolerated. The president said the tariffs being charged against other countries would help to fund the U.S. government, and repeated his refrain that the U.S. could not lose a trade war in a international climate where the rules were already stacked against American business. He specifically noted the size of the trade deficit with China as he defended his moves.

“The U.S. has been ripped off by other countries for years on Trade, time to get smart!” Trump tweeted Saturday.

While both the U.S. and China reported some progress in discussions this weekend about how to reduce China’s $375 billion goods-trade surplus with the U.S., Trump’s revival last week of a plan to slap tariffs on $50 billion of Chinese imports has cast the talks into turmoil.

“If the U.S. rolls out trade measures including tariffs, all the agreements reached in the negotiations won’t take effect,” state-run Xinhua News Agency reported Sunday, citing a statement from the Chinese team that met with a U.S. delegation led by Commerce Secretary Wilbur Ross.

France’s Le Maire opened the door to negotiations over U.S. tariffs, but said the ball is in Trump’s court. “We want to avoid a trade war,” he said. “But everything is ready.”

The warning came after an acrimonious three days of talks -- with U.S. Treasury Secretary Steven Mnuchin on the receiving end of much of the frustration -- in which America’s allies protested against Trump’s decision to impose tariffs on steel and aluminum from the European Union, Canada and Mexico.

The trade dispute triggered one of the biggest crises in the G-7 since the group’s formation by Canada, France, Italy, Germany, the U.K., Japan and the U.S. In a rare rebuke of a member nation, G-7 finance chiefs said the U.S. duties could “undermine open trade and confidence in the global economy.”

“It has been a tense and tough G-7. I would say it has been far more a G-6 plus one than a G-7,” said Le Maire. The EU has threatened to retaliate with duties on everything from American motorcycles to bourbon. Canada and Mexico have also promised to levy their own tariffs on U.S. goods.

Before last week’s trade actions by the U.S., the European Union and Canada had been granted temporary exemptions. Japan had already been subject to the tariffs, which the U.S. said were necessary to protect its national security.

At his closing press conference, Mnuchin said that he’s already conveyed the G-7 message to Trump, who he said “has been very clear in wanting to address trade issues.”

Mnuchin rejected the notion the U.S. is abandoning its traditional leadership role in the world economy, noting that America is driving global growth. While acknowledging the U.S. tariffs are causing friction, he said the members of the group agree on many other issues.

“Our objective is to make sure we have fair and balanced trade,” Mnuchin said in the Canadian ski resort town. “There was a comment out there that it was the G-6 plus one. It was not. It’s the G-7. We believe in the G-7.”

Mnuchin faced so much criticism from his counterparts that Japanese Finance Minister Taro Aso said he almost “felt sorry” for the U.S. finance chief.

“He’s not directly in charge of the metal tariffs, so in that sense it was very tough for him,” Aso told reporters. “I felt sorry for him, but I guess it’s not the sort of issue I should sympathize with.”

--With assistance from Jana Randow