As hordes of day traders show their force in markets once again, a triple-leveraged exchange-traded fund that tracks the Nasdaq 100 is on pace for its best week of inflows on record.

The US$11 billion ProShares UltraPro QQQ ETF (TQQQ) has attracted almost US$800 million of fresh cash in the span, according to data compiled by Bloomberg. The fund has lured substantial inflows despite a price drop of more than 6 per cent amid a selloff in large technology companies.

The high-flying tech names that have led the bull market in stocks from pandemic lows have faced ongoing turmoil as Treasury yields climb and high valuations become increasingly unpalatable. In the meantime, expectations for broader economic reopenings are breathing life into the long-neglected value shares -- putting the Russell 2000 Index of small caps on track to beat the Nasdaq 100 for a sixth straight month. 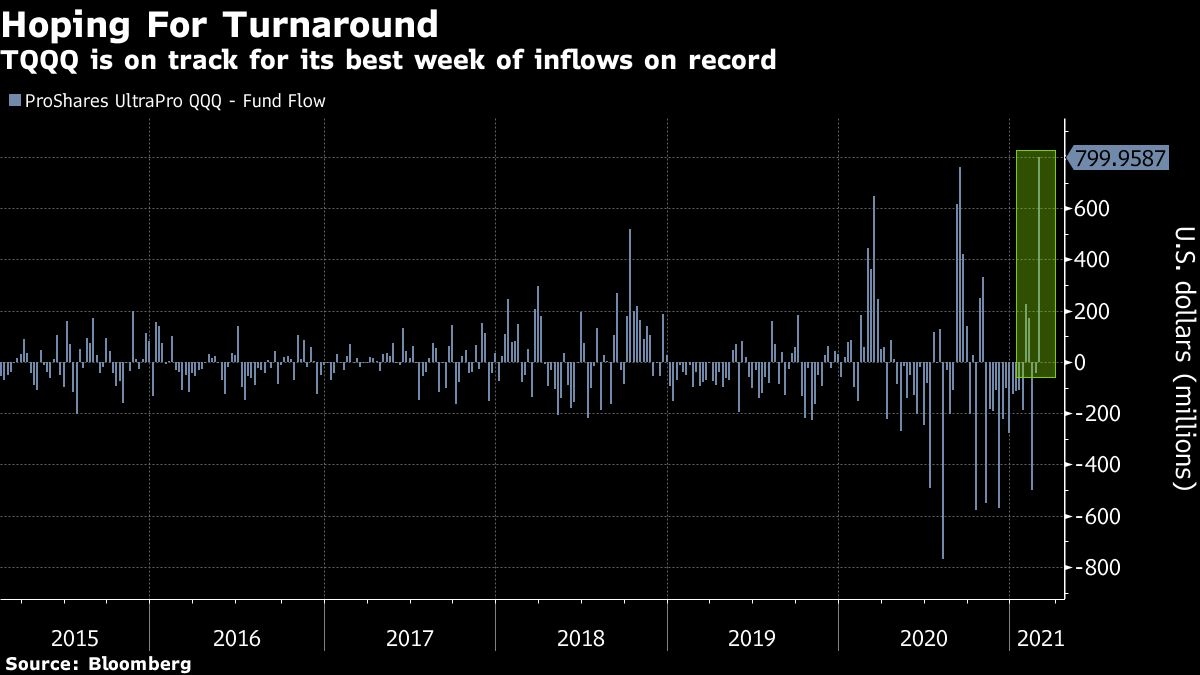 “When you’re investing into anything that’s triple leveraged, that’s absolutely a speculative tool,” said Chris Gaffney, president of world markets at TIAA Bank. Is it investing or gambling? That’s the line you start walking down.”

TQQQ is a favorite among retail investors who re-emerged late Wednesday, sending Reddit-favorite stocks soaring. The ETF is currently listed as the security with the 14th highest volume of orders on Fidelity’s website.

“You still have very solidly positive sentiment on the part of individual investors,” said Brian Nick, chief investment strategist at Nuveen, the investment arm of retirement-savings giant TIAA. “As long as retail investors remain bullish, you could continue to see volatility in some of these popular names.”