A breakneck selloff in the bond market left one of the biggest Treasury exchange-traded funds bleeding.

The US$14 billion iShares 20+ Year Treasury Bond ETF (ticker TLT) has plunged 11 per cent this year as long-dated Treasury yields climbed, fueled by building wagers on a rebound in inflation. Investors have yanked over US$3.2 billion from the fund so far in 2021, whittling TLT’s total assets to the lowest level since mid-2019, according to data compiled by Bloomberg.

COVID-19 vaccine rollouts combined with the prospect of further fiscal aid from the Biden administration has forced a reckoning of sorts for the Treasury market, where long-dated yields were hovering near historic lows entering 2021. Breakeven inflation rates have soared to multi-year highs, dragging benchmark 10-year yields to the highest in over a year, as the economic outlook brightens. That point was reinforced by Federal Reserve Chairman Jerome Powell on Tuesday, when he said that the recent run-up in bond yields is “a statement of confidence” in the economy, while downplaying the risk of a sustained pickup in price pressures.

“It certainly feels like a tantrum is underway. Despite the Fed’s repeated reassurances that they see no clear risks to higher inflation investors are not convinced,” said Subadra Rajappa, head of U.S. rates strategy at Societe Generale SA. “Any hints of change in Fed asset purchases could put the brakes on the back-end selloff. Barring that, there could be more room for yields to rise.” 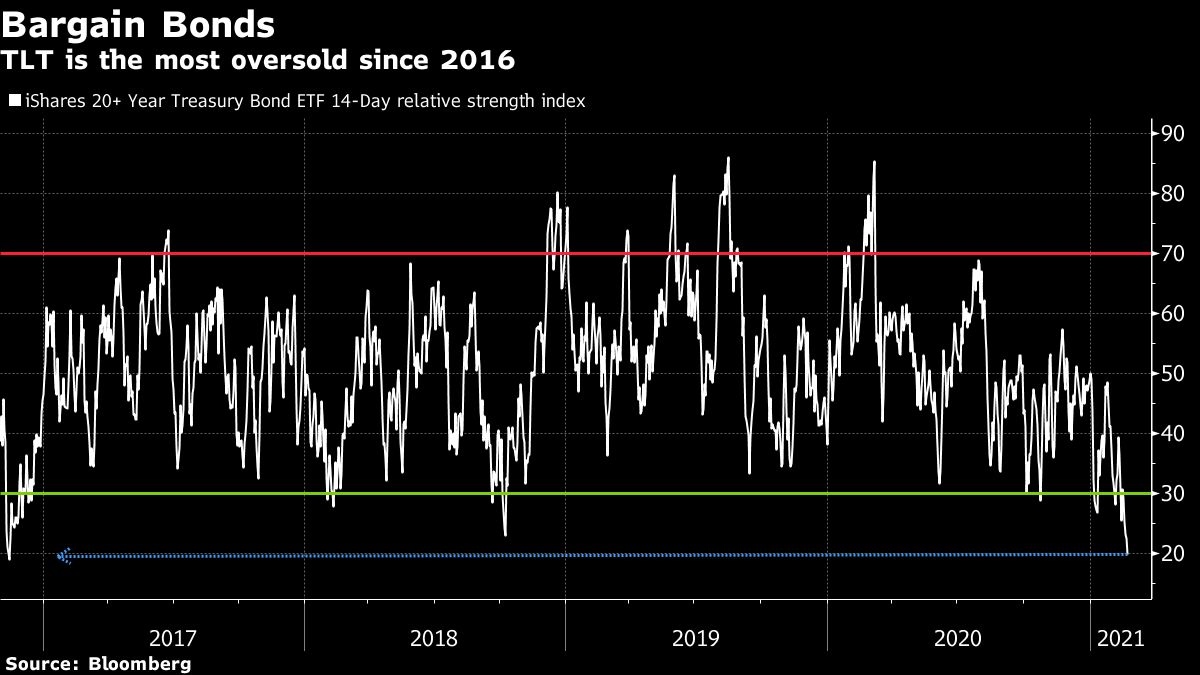 TLT fell another 1.2 per cent on Wednesday, bringing the fund’s price to the lowest level since last March. It rallied more than 16 per cent in 2020 as the central bank grappled to contain the fallout of the pandemic, slashing rates to near-zero and unleashing a spate of bond-buying facilities to keep credit flowing as the economy plunged into a recession.

Two months into 2021, the landscape is starkly different. While the U.S. unemployment rate clocks in at a still-elevated 6.3 per cent, that’s below the 6.5 per cent level that policymakers had forecast last June. It’s a similar picture in corporate America. Nearly 80 per cent of S&P 500 companies that reported earnings so far this season have beat analyst estimates -- a near-record pace, according to data compiled by Bloomberg Intelligence.

TLT’s plunge has pushed the fund’s 14-day relative strength index (RSI) -- which measures the magnitude and persistence of price movement -- the most into oversold territory since November 2016. In the eyes of Bleakley Advisory Group’s Peter Boockvar, that could slow losses.

“Bonds are getting oversold, though in the short term and I wouldn’t be surprised if the rise took a breather,” Boockvar wrote in a note Wednesday on higher yields.

While Powell signaled on Tuesday that central bank was poised to keep up its pace of asset purchases even as the economic outlook improved, that wasn’t enough to soothe the market, according to Priya Misra of TD Securities.

“We need the Fed to sound concerned about the rise in real rates and suggest that they are not about to taper anytime soon. That can scare away some shorts in the Treasury market,” Misra, the firm’s head of global rates strategy, noted. “He said that the rise in rates reflects confidence in the economy. I think the rise in rates also reflects nervousness about Fed support.”