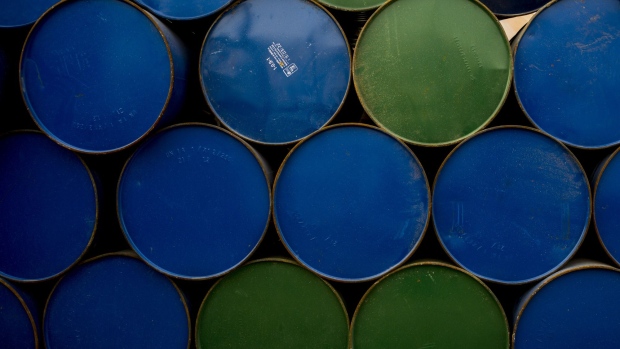 Oil barrels in Faridabad, India, on Sunday, June 12, 2022. Extreme weather conditions in some nations, combined with Russia’s invasion of Ukraine, have led to a global squeeze in supplies of fossil fuels, and sent prices of oil, natural gas and coal soaring. Photographer: Anindito Mukherjee/Bloomberg , Bloomberg

(Bloomberg) -- The fallout from Russia’s invasion of Ukraine and the outlook for a volatile market are set to be key topics at Asia’s biggest gathering of oil traders and executives, which entered its second day in Singapore.

The annual Asia Pacific Petroleum Conference returned to an in-person format for the first time since the pandemic erupted. Attendees are mulling over the impact of upcoming European Union sanctions on Russian oil flows, the energy transition, and the prospect for a winter power crunch. All times are local.

Saras Trading SA is looking to open an office in the US to market its products as gasoline and diesel demand declines in Europe, according to Chief Commercial Officer Marco Schiavetti.

“We need to be able to cover more markets,” he said, adding that the company was already shipping much of its gasoline to the US and had opened an office in Singapore. The growth in electric vehicles has crimped European demand.

There’s downward pressure on oil prices and it may continue for some time, with the market facing a stronger US dollar and recessionary fears, said Saad Rahim, chief economist at commodity trader Trafigura Group.

Macro factors are winning as moves in and out of currency markets have a big impact on oil prices, Rahim said. There are a number of dislocations in the market that are allowing trading companies to grow market share, he added.

Russian oil cargoes that are flowing to India’s Bharat Petroleum Corp. are being insured through Russian companies, said Amit Bilolikar, the deputy general manager of the company’s crude trading desk.

The refiner is buying Russian oil on a delivered basis and the process is going “smooth so far,” Bilolikar said. US crude now accounts for 20% of Bharat Petroleum’s purchases, he added.