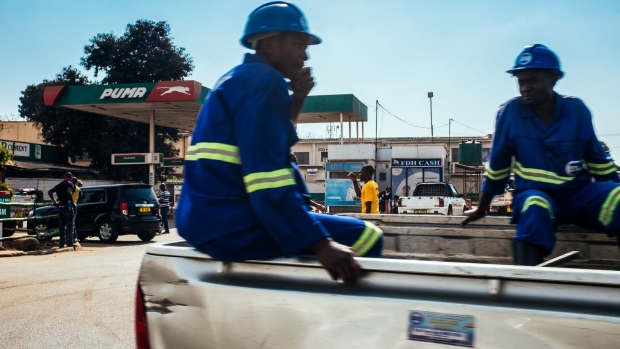 Construction workers ride in the back of a pickup truck past a Puma Energy Holdings Pte. Ltd. gas station Lilongwe, Malawi, on Tuesday, June 26 2018. The diversification of the agriculture-reliant economy is a top priority, Malawian President Peter Mutharika said in an interview on Monday. , Bloomberg

Trafigura’s ownership will rise to more than 90% after it took up most of a $500 million rights issue and Sonangol agreed to sell its 32% stake in a deal valued at $600 million. The Angolan company will swap its equity stake for Puma’s operations in the African nation with no cash changing hands, a Trafigura spokesperson said.

Puma’s Chief Executive Officer Emma Fitzgerald will also step down with immediate effect. The changes are the latest upheaval for the beleaguered company which has racked up years of losses and been weighed down by debt from a multibillion-dollar buying binge from Myanmar to South America as well as currency-related troubles in some of its biggest markets.

Trafigura’s control means it will reconsolidate the Puma stake back on its books. That could potentially threaten its recent record earnings run from trading crude, oil products and metals amid volatile price swings caused by the coronavirus.

The Singapore-based company, whose senior management are based in Geneva, racked up gross profit of $6.8 billion in its 2020 fiscal year, the highest in its 27-year history.

At the same time, the pandemic hurt Puma’s fuel retail and storage operations. To help stem losses, it sold projects and restructured, but weak demand for its products, particularly jet fuel, hampered the turnaround efforts. It lost $324 million in 2020 and $753 million the previous year.

Puma said proceeds from the $600 million stake sale and the $500 million rights issue would be used to pay down a 2018 term loan and strengthen its balance sheet.

Trafigura booked a one-time gain of $1.43 billion in 2013 after cutting its stake in Puma to 49% from 62%. The company, however, took a $191 million impairment in its 2020 fiscal year as it reduced the value of its stake in the unit. It also recorded a $326 million net loss from Puma for that year, Trafigura said in its annual report.

The trading house became a majority holder again after buying part of a former Angolan military general’s stake last year. Following the latest deal that gives it a more than 90% stake, the rest of Puma will be owned by a group of current and former Trafigura executives as well as a holding company controlled by the ex-military general.

The company’s assets in Angola acquired by Sonangol include a retail network of 79 service stations, as well as three airport terminals and the Terminal de Combustíveis da Pumangol em Luanda storage terminal in Luanda Bay.