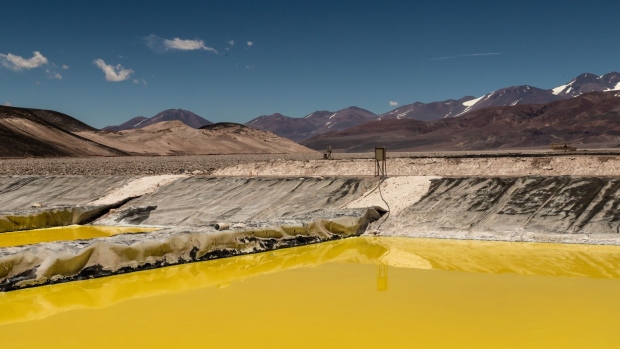 (Bloomberg) -- Trafigura Group said its plan to invest in a new UK lithium refinery will mark the start of the trading giant’s foray into buying and selling the crucial battery metal.

Last week’s agreement to back the plant being developed by startup Green Lithium brings the world’s top independent commodities trader into a market struggling to create enough new supply to meet demand for electric vehicles. The deal is part of Trafigura’s plan to grow a lithium trading book and link global car and battery companies to mines, its nickel and cobalt head said.

“There’s a big movement in this space, with a question mark on where the raw materials and cathodes will be coming from,” Trafigura’s Socrates Economou said in a phone interview. “We decided at least when it comes to battery metals, we cannot be only looking at nickel and cobalt.”

Surging demand is driving battery metals higher and fueling worries about shortages as the green revolution gathers pace. Trafigura already moves about a fifth of the world’s tradeable battery-grade nickel and 10% of all cobalt, yet the company — along with the very biggest players in the metals and mining world — has so far largely stayed on the sidelines when it comes to lithium.

Demand for lithium in batteries has risen so sharply that some car companies have gone directly to miners to secure metals needed to deliver cars to consumers. Tesla Inc.’s Elon Musk and Nissan Motor Co. executive Ashwani Gupta have both recently talked about owning or investing in mines in the future.

As part of the plan with Green Lithium, Trafigura will also supply feedstock to the UK plant, which will sell battery-grade lithium chemicals to EV makers in Europe. Initial production is being targeted for the end of 2024.

Aside from heavyweight Rio Tinto Group, major miners have so far shied away from deals in lithium. The biggest assets have been run by industry mainstays like Chile’s SQM, Albemarle Corp. and Pilbara Minerals Ltd., with the rest by cash-hungry juniors in need of funding.

That has drawn traders to the sector. Traxys SA and IXM SA have bolstered lithium trading desks in the past year, while Mitsui & Co. and Toyota Tsusho Corp. have a history of buying and selling the metal.

And with carmakers spending billions of dollars on a battery-powered future and miners and governments looking to boost production, there could soon be a lot more metal to trade.

“We estimate that by 2030 at least 60% of mine supply will be coming from new projects and expansions,” said Claire Blanchelande, who heads lithium business development at Trafigura. “There’s going to be a lot of growth in the tradeable market with volumes from projects due to come online in the next few years.”

That could expand spot markets for lithium carbonate, hydroxide and raw material spodumene, which outside of China are currently thinly traded aside from long-term contracts.

“A lot of contracts are coming up for renewal in the next two to three years, so we see more volumes from existing producers becoming available,” Economou said.