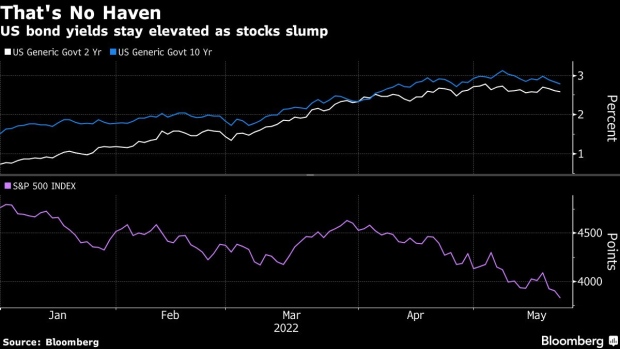 (Bloomberg) -- After a violent rally in bonds, Treasury traders are debating whether recent tough talk from the Federal Reserve on its commitment to cooling prices is enough to reverse the trend.

The hot inflation readings that helped drive Treasury rates across the maturity spectrum to multiyear highs earlier this month have given way to economic growth concerns that have drawn money back into bonds. The S&P 500 Index this week reached levels 20% off its record high amid consumer spending woes, and expectations for how much the Fed might raise interest rates over the next year have ebbed.

There’s more potential for market volatility ahead after Fed Chair Jerome Powell made his most hawkish remarks to date, committing to hike until there is “clear and convincing” evidence that inflation is in retreat. He’s slated to made pre-recorded welcoming remarks at an economic meeting on Tuesday.

“The expected path for Fed policy has moved lower,” said Benson Durham, head of global asset allocation at Piper Sandler. “Still, there’s just a lot of uncertainty in the markets” on inflation as well as growth, he said. “It’s tough for the Fed now, they really have to try to thread the needle.”

Piper Sandler’s models reckon the 10-year yield should be about 3%. Durham said it’s reasonable to expect a range of 2.5% and 3.5% over the next several quarters.

While short-term interest-rate markets continue to price in half-point rate hikes by the Fed at each of its next two meetings in June and July, another half-point hike in September is no longer the certainty it seemed earlier in the month. And bets on a three-quarter-point adjustment -- the first since 1994 -- have all but disappeared.

Likewise, the policy rate is expected to peak at around 3.10% next year, down from near 3.5% in early May.

Traders revised their expectations not only because of falling stock prices that tighten financial conditions throughout the economy, but also because those losses have come in the consumer sector -- a bellwether for slowing growth. Shares of Target Corp. and Walmart Inc. collapsed after the companies, struggling to pass on higher costs to customer, cut their profit forecasts. Dollar General Corp., Macy’s Inc. and Costco Wholesale Corp. are among the retailers that report results next week.

“Tighter financial conditions are part of the solution and not the problem,” said Pramod Atluri, portfolio manager at Capital Group. Powell’s hawkish comments suggest the Fed is seeking “lower stocks, higher yields and rising unemployment” to slow the economy and inflation, he added.

Investors could get a better handle on the scope of the Fed’s commitment to that goal when the central bank releases the minutes of its May 3-4 meeting on Wednesday. At that meeting, it raised the policy rate by a half point -- the first increase of that size in more than 20 years -- and set a timeline for balance-sheet runoff.

Starting in June, the Fed will stop reinvesting all of the securities in its portfolio as they mature. In time, that will require more Treasury borrowing, but for the moment, an improving federal deficit is averting the need for larger auction sizes. The two-, five- and seven-year auctions slated for next week are smaller than last month’s, and additional cuts have been slated for the next two months.

The supply dynamics along with the Fed’s posture -- and its potential impact on stocks -- support a scenario in which short-dated yields resume rising while longer-dated ones remain steady or even decline, an outcome that several major dealers expect.

Yield curve inversion “is plausible -- and deeper than what we saw in April,” said Gregory Faranello, head of US rates trading and strategy for AmeriVet Securities.

Forward markets for interest rates price in around 10 basis points of inversion a year from now in the 2- to 10-year spread, and no inversion for the 5- to 30-year spread, both of which inverted in March-April for the first time in years.

“Financial conditions are tightening a lot, high inflation is cutting into consumers and companies, and the Fed is still pushing a very hawkish tone,” Faranello said.