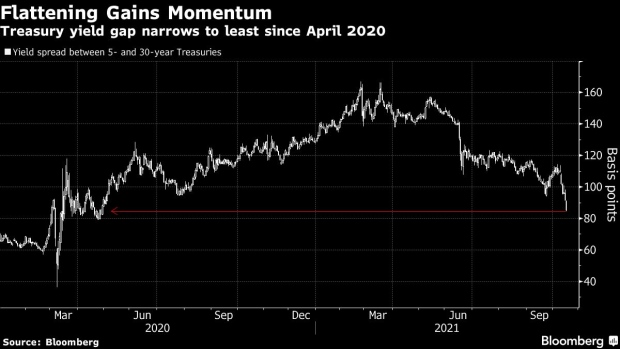 (Bloomberg) -- The Treasury yield curve flattened sharply Monday as surging energy prices stoked inflation fears and added fuel to growing expectations that the Federal Reserve will have to lift policy rates as soon as next year.

The gap between 5- and 30-year yields shrunk to as little as 84.5 basis points, raising concerns over it potentially signaling a growth slowdown. The spread is now at its least since April 2020, a time when pandemic fears brought the global economy to a near shutdown. Five-year yields were up around 5 basis points to about 1.18%, while the 30-year bond yield was little changed 2.05%

In February this slice of the curve had reached an over 7-year high of 167 basis points, reverting lower slowly thereafter as traders brought forward the start of Fed hikes after the central bank policy moved their own projections to June. Money-market traders see a fifty-fifty chance that the Fed lifts rates as soon as June, and are pricing in two full quarter point increases in the funds rate by the end of next year.

“There’s a perception that with the Fed set to announce tapering in November and possibly raising rates at some point next year that the economy is getting a little bit exhausted on the growth side,” said Tom di Galoma, managing director of government trading and strategy at Seaport Global. “That’s one of the reasons the curve is flattening.”