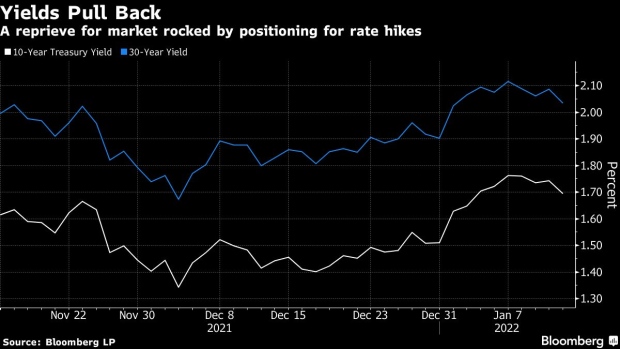 (Bloomberg) -- After the relentless bout of selling that kicked off the year, buyers of long-dated Treasuries are swooping back in, extending a reprieve to a market rattled by surging inflation and a move toward tighter monetary policy by the Federal Reserve.

Benchmark 10-year yields have stepped back from their highest level since January 2020, spurred in part by oversees investors drawn in by the spike during the first week of the year. A $22 billion auction of 30-year Treasuries on Thursday cleared with virtually no discount to prevailing yields. And prices gained afterward, driving down some yields by 5 basis points on the day, with the sale seen as a key test of demand.

The steadying marks a welcome, if potentially temporary, break from what had been a brutal start to the year for the world’s biggest bond market due to growing conviction that the Fed is poised to start raising interest rates in March and begin shrinking its $8.8 trillion balance sheet over the second half of 2022. This week’s pullback in yields reflects the view in some quarters that the market repriced too much, too quickly given the uncertain economic outlook, even if there’s widespread consensus that rates will rise as the central bank pulls back the tide of cash it’s been pumping out since the onset of the pandemic.

“The initial bond-bearish euphoria appears to be waning at the moment,” said Ian Lyngen, head of U.S. rates strategy at BMO Capital Markets. “But the combination of stability in other asset classes and further progress toward the cycle’s first hike will steadily embolden those anticipating higher yields.”

The respite also likely reflects the still-loose policy of the central bank, which is set to keep buying more bonds until March even as consumer prices jump at the fastest annual pace since 1982 and wages continue to rise. At the same time, there are questions about whether a series of relatively shallow rate hikes will tamp down inflation -- or if the Fed will find itself behind the curve, fighting a type of wage-price spiral like the one that gripped the nation in the early 1980s.

Fed Chair Jerome Powell this week said the central bank is prepared to crank up the pace of tightening if needed, and some Fed officials have been pushing for the bank to shrink its bond holdings at a faster pace.

The Fed’s trajectory is seen justifying a climb in 10-year yields above 2%, an area previously frequented in mid-2019. On Thursday, the 10-year yield fell about 4 basis points to around 1.7%.

“A 10-year Treasury yield rising toward 2.25% makes sense with the Fed indicating that it will make a fast start to tightening this year,” said Jason Bloom, head of fixed income and alternatives ETF strategies at Invesco.

Based on the current level of historically low long-dated yields, the bond market expects a rapid moderation of inflation and remains skeptical that the Fed can tighten overnight rates much beyond 2% without sparking financial turmoil for a deeply indebted economy.

“The market thinks the Fed will not raise rates beyond 2.5% without triggering a recession,” said Bloom.

Such expectations have underpinned buying of 10- and 30-year Treasury debt this week after yields rose sharply from 1.51% and 1.90% at the end of December. Another supportive factor is foreign demand, given that long-dated Treasury yields are comfortably higher than those of their main sovereign rivals. Once the 10-year Treasury is hedged via the currency market, a European investor is left with a yield around 1%, “the most in five years,” Saxo Bank said in a research note this week.

Garry Evans, chief global asset allocation strategist at BCA Research, expects the Fed to enact three quarter-point hikes this year, with the risk of a fourth, and downplays the risk of a faster tightening cycle. But he said “a price/wage spiral” would prompt more aggressive moves.

“There is a risk that wages go higher and the Fed starts worrying,” Evans said, after which “the market starts pricing in a scenario that the Fed has lost control of inflation.”

Such a turn would challenge the current broad consensus that rate hikes primarily drive up policy-sensitive short-dated yields, resulting in a flatter curve as those on 10- and 30-year bonds rise at a slower pace. But that reflects the traditional view that rate hikes will slow growth and inflation, which seems by no means assured given how historically low rates will remain even after this year’s expected cycle of increases.

“We won’t really know what inflation looks like, and whether the Fed is behind the curve, until the end of this year,” said Invesco’s Bloom.

In the near term, the case for higher yields has room to build once excessively bearish positioning clears and some investors close out trades to pocket recent gains. Taking a negative view had become very crowded at the start of this week, with net-bearish positions at their highest level since 2017, according to a survey from JPMorgan Chase & Co.

And a resumption of Treasury selling may well start ahead of the Federal Open Market Committee meeting at the end of January as investors seek to get out ahead of any hawkish surprises.