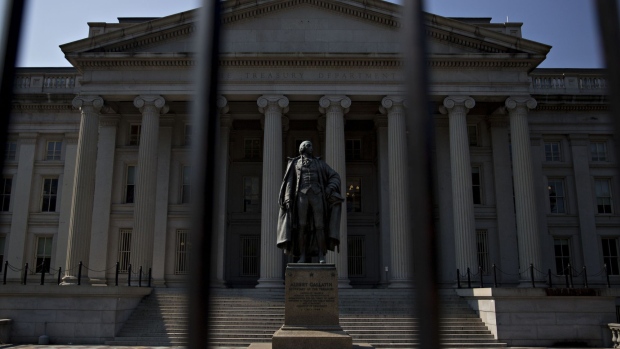 (Bloomberg) -- Mixed news on US inflation eroded the US bond market’s recent gains ahead of next week’s consumer prices gauge and last Federal Reserve rate decision of the year.

Treasury yields climbed Friday after November producer prices rose more than estimated, and kept rising after the University of Michigan’s December sentiment gauge rose more than forecast, even as its survey of consumer inflation expectations for the next 12 months fell more than expected to 4.6%.

The 10-year yield rose more than 8 basis points to 3.56%, extending a rebound from 3.40% on Wednesday, its lowest level since mid-September.

The prospect of a modest US recession and ebbing inflation pressure next year has powered a hefty rally over the past month, led by long-dated Treasuries.

The 30-year yield led the selloff Friday, rising nearly 12 basis points to 3.55%. Earlier this week it recorded a drop of 100 basis points from its mid-October peak of 4.42%. Treasury yields were near their highs of the day in late trading, a cushion in case November consumer inflation fails to abate as much as expected or the central bank delivers a hawkish outlook for policy into 2023.

“The two most important questions for next year are how fast inflation will drop and how much will it need to drop for the Fed to stop tightening,” analysts at Bank of America wrote, and markets appear “too optimistic on both.”

Economists estimate the consumer price index, to be released Dec. 13, rose at a 7.3% annual pace in November, down from 7.7% a month earlier. The October report suggested inflation had peaked after running at its strongest pace in four decades.

Next week’s Fed meeting will cap the most aggressive cycle of tightening in decades. Auctions of 10- and 30-year Treasuries are also slated and may require a temporary price concession, pushing up yields before the meeting ends Wednesday.

The central bank is expected to deliver a half-point hike to follow four straight three-quarter-point moves, bringing the policy rate band to a 4.25%-4.5% range. Bond traders expect a plateau of around 5% by the middle of next year as the central bank takes time to assess the impact of its policy changes.

“The peak inflation narrative has gained momentum following the last CPI print and as housing remains under pressure, the shelter subcomponent of core inflation will almost by definition need to moderate,” Ian Lyngen, head of US rate strategy at BMO Capital Markets said in a note. There remains a risk the Fed will need “to lay the groundwork for an even higher terminal rate,” in the event that inflation data over the months through next February “remain stubbornly lofty.”

The Fed will also update its quarterly summary of economic projections and officials’ anonymous forecasts for policy rates in future years. The swaps market is pricing in a half-point cut by the end of next year and around two percentage points of easing by March 2025.

The sharp drop in 10-yields has seen the benchmark trade as much as 0.85 percentage points below the policy-sensitive two-year yield, the deepest curve inversion in decades. In past Fed rate cycles, yield-curve inversions have been reliable warnings of recession.