The 10-year Treasury yield climbed to the highest in more than a week after Federal Reserve policy makers surprised markets and signaled two quarter-point rate hikes by the end of 2023.

Ten-year yields rose as much as about 10 basis points to 1.59 per cent, extending a rebound from a three-month low of 1.427 per cent hit last week, as they touched the highest since June 4. Yields in the 5- to 7-year sector, which is especially sensitive to Fed policy expectations, led the rise. The five-year rate reached the highest since April, flattening the yield curve.

The projections of when officials envision lifting their benchmark overnight rate from near zero also sent the dollar surging. Bond-market gauges of inflation expectations fell as traders moved forward bets on when the Fed will lift its benchmark from near zero, to the end of 2022 from early 2023. 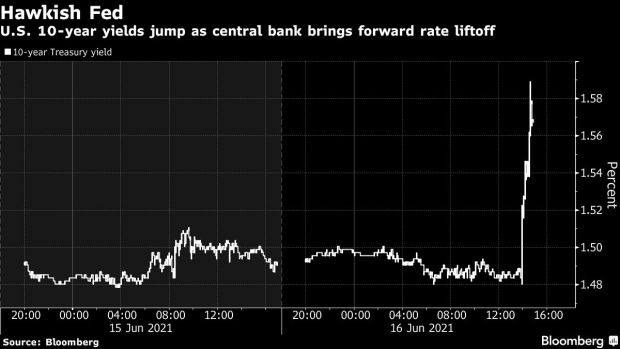 The new projections suggest “policymakers are becoming more confident in their economic assessment over the medium-term, shifting the consensus towards earlier policy normalization,” said Simon Harvey, a senior currency analyst at Monex Europe Ltd in London.

The Fed’s quarterly projections showed 13 of 18 officials favored at least one rate increase by the end of 2023, versus seven in March. Eleven officials saw at least two hikes by the end of that year. In addition, seven of them saw a move as early as 2022, up from four.

Breakeven rates, measured by the difference in yields between nominal Treasuries and inflation-protected securities, tumbled. Five-year breakevens slid about 7 basis points to 2.42 per cent, helping drive real rates projected over the next half decade up about 16 basis point to minus 1.56 per cent.

Markets are also reacting to the fact that traders now see even greater odds that the Fed will some time over coming months start laying out plans to taper its US$120 billion in monthly bond purchases.

“Bottom line, we now have a tightening cycle to look forward to but be sure, it will be glacial but will NOT be like watching paint dry considering how extreme the easing was,” Peter Boockvar, chief investment officer for Bleakley Advisory Group, wrote in a client note. And “the Fed is FINALLY talking about tapering.”

Tightening coming closer into view sent the 2-year Treasury note to its highest in a year, to 0.21 per cent. 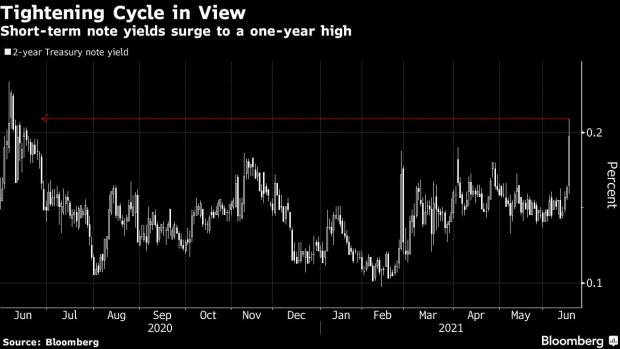 Chair Jerome Powell told a press conference Wednesday that officials had begun a discussion about scaling back bond purchases. “While reaching the standard substantial further progress is still a ways off, participants expect that progress will continue,” he said.

The Fed is presently buying US$80 billion in Treasuries and US$40 billion in mortgage debt a month. Some investors have speculated the central bank could possibly slow its mortgage buying first.

And when the central bank is ready to signal the start of tapering, they will be very careful, Powell said.

“It will be orderly, methodical and transparent,” Powell said. “We see real value in communicating well in advance what our thinking is. We’ll give advance notice before announcing a decision to taper.”