Buying new locomotives and rail cars isn’t a short-term fix to the glut that has sent prices plunging because it would take at least a year to get the new trains in place, the officials said, asking not to be named because the stance is not public. While two cautioned that no final decision has been made -- with Trudeau visiting the heart of Canada’s oil industry on Thursday -- the officials downplayed the chances of a train purchase.

Alberta asked a month ago for the federal government to buy more locomotives to boost shipping capacity as it struggles with near-record low prices and a supply glut. Premier Rachel Notley made the request after an Oct. 22 meeting in which some oil executives pushed for a forced cut to production.

Trudeau’s energy minister is reviewing the proposal but Notley said Thursday Alberta hasn’t received a reply. Asked if the province would make the purchase on its own, the premier said she’d do “whatever it takes” to increase rail capacity.

Trudeau, who’s speech in downtown Calgary was marked by a pro-pipeline protest that gathered hundreds of people, wouldn’t say what he thinks of the Alberta rail proposal, but agreed the oil situation is serious.

“This is very much a crisis,” Trudeau said. “When you have a price differential that’s up around $42, $50 even, that’s a massive challenge to local industry, to the livelihood of a lot Albertans, and I hear that very clearly.”

One of his key ministers, however, was downplaying expectations for a rail intervention. Federal Finance Minister Bill Morneau signaled Wednesday the government doesn’t back the plan, saying pipelines are the long-term solution and there’s no silver bullet in the short-term. 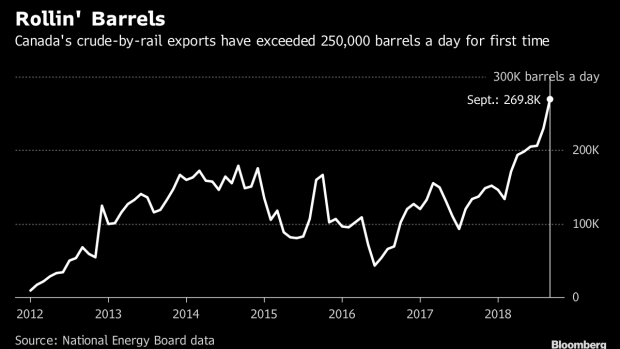 Notley’s request is for new trains that could carry 120,000 barrels per day, one of the officials said. Those trains would enter service as soon as July, with others coming in October, the official said, however training enough engineers could delay the plan. It would cost $350 million (US$265 million) to purchase the trains and C$2.6 billion to operate them over three years. Alberta estimates about $2 billion would be recovered from shippers, in addition to extra tax revenue from a higher oil price, the official said.

U.S. refineries are due to return to full capacity soon and Enbridge Inc.’s Line 3 pipeline is scheduled to enter service next year, the officials said, and both will alleviate the shipping crunch. The low prices seen this month are an urgent problem that new rail locomotives won’t arrive in time to fix, they said. Canadian National Railway Co. and Canadian Pacific Railway Ltd. are already increasing shipments of crude.

“There is not, in my estimation, any short-term measure we can do to solve the problem,” Morneau said.

A federal budget update released Wednesday included broad-based tax breaks for business investment, which Morneau said would help all sectors, including oil producers. However, it included no Alberta-specific measures -- prompting a harsh reaction from the province.

“The crisis happening in this province affects the whole country but they are speaking a different language,” Alberta Finance Minister Joe Ceci said Wednesday. “We must get our product to tidewater and nothing today addresses that.”

Notley said last month the federal government is losing money over the oil differential issue, and needs to step up to support a rail expansion.

“We need more cars. We need to order more locomotives in order to get more cars onto rail. That’s the bottom line,” she told reporters in October. She agreed pipelines are the long-term solution to Alberta’s oil-price crisis. “In the meantime however, we need to take a close look at the tools available to us to close the differential where it’s feasible.”

--With assistance from Erik Hertzberg, Robert Tuttle and Kevin Orland.