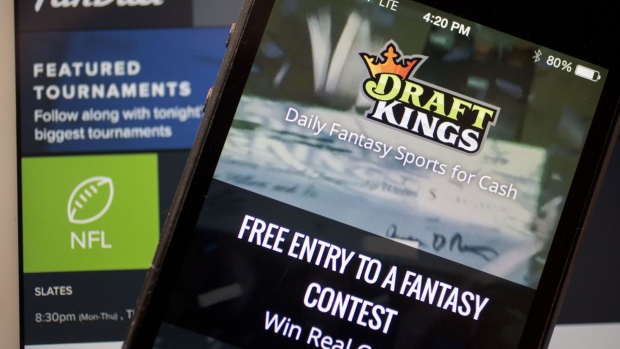 The DraftKings Inc. app and FanDuel Inc. website are arranged for a photograph in Washington, D.C., Oct. 5, 2015. Bloomberg/Andrew Harrer

The planned changes would allow provinces to issue licenses for companies to accept wagers on all sporting events except horse racing, which will remain under a separate system. It is currently illegal to bet on single games under Canadian law.

“The goal of the legislation is simple: it is to bring a common practice out of the shadows and into the open. To make it legal, regulated and safe,” Lametti told reporters Thursday in Ottawa.

The governing Liberal Party voted against a similar bill in parliament in 2016.

Canadians spend $10 billion (US$7.7 billion) per year on single-event betting through illegal bookies and a further $4 billion on international betting websites, according to Lametti.

Shares of Score Media & Gaming Inc. soared on the announcement. Previous laws were “outdated” and the changes will allow the legal sports betting market to flourish, said John Levy, founder and chief executive officer of the Toronto-based company, in an email. “Canadians deserve a modernized and regulated sports betting market.”

Provinces would also earn a new tax revenue source as a second wave of COVID-19 depletes fiscal coffers and wreaks havoc on the economy. The gambling industry in Ontario alone could see $1.47 billion in revenue, Kilsby said.

Online sports wagers and iGaming created almost US$160 million in tax revenue in 2019 in the U.S., according to the American Gaming Association.

“Canada’s gaming industry has been severely impact by COVID-19 so having access to this new product will assist in the industry’s recovery,” said Paul Burns, CEO of the Canadian Gaming Association. “Our expectation is that it will now move expediently through the process to completion.”