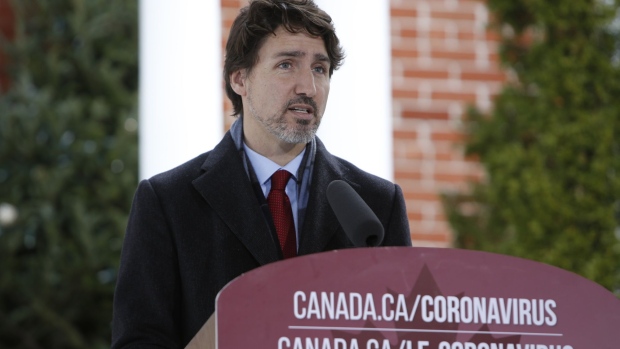 (Bloomberg) -- Prime Minister Justin Trudeau announced C$2.45 billion ($1.75 billion) to help workers in Canada’s energy sector, a smaller aid package than had been sought by an industry that has been hammered by the plunge in oil prices.

Most of the money is aimed at the environment: The government will provide C$1.7 billion to help clean up abandoned oil and gas wells and spend C$750 million on an emissions-reduction fund, initiatives that will help maintain 10,000 jobs, Trudeau said at a press conference on Friday in Ottawa.

While the abandoned wells project may provide jobs for field workers that are laid off because of cuts in drilling, some in the Canadian oil sector have said C$20 billion to C$30 billion is needed to help it survive the double blows of the pandemic and an overwhelming global supply glut.

Alberta Premier Jason Kenney, a conservative who has often battled Trudeau, praised the wells fund. “This is critical to getting thousands of people in the energy sector back to work immediately,” he said on Twitter.

But some Canadian oil companies that are shut out of credit markets will have to pin their hopes on a liquidity injection from the government lending agencies.

Asked about the scale of potential funding, Morneau said: “It’s going to be demand driven. So we know for firms in the energy sector, they are going to need access to this credit. We are not putting a limitation. It’s on a commercial basis but it’s going to allow them to get through this challenge.”

The measures highlight the struggle Trudeau faces in helping an industry that accounts for nearly 10% of Canada’s economy and a fifth of its exports but is wildly unpopular with his environmentalist base. Groups like Greenpeace have been pressing Trudeau’s government not to bail out the industry. Instead, they say the pandemic and low oil prices present an opportunity to wean Canada off its reliance on fossil fuels and reduce the country’s carbon footprint through a carbon tax and legally binding emissions targets.

Financial aid to the industry also is contentious because of its relatively high incomes. Average weekly earnings in the oil and gas sector were C$2,740 last year, making it the best paying sector and almost three times the national average of C$1,029. The federal government already had announced a 75% wage subsidy for businesses that have suffered revenue declines.

But a failure to help the sector would stoke anger in Western Canada, home to the world’s third-largest oil reserves. Kenney has been calling for a massive liquidity package for the sector, whose workers account for a sizable voter base for conservative parties at both the provincial and federal level.

Due to its relative isolation and the limited availability of pipelines for export, Canada’s oil patch has been among the first to experience the full weight of the global crude price collapse, caused by the massive contraction in oil demand.. Some of the largest oil-sands producers, like Suncor Energy Inc. and Cenovus Energy Inc., have been forced to reduce production while others like Athabasca Oil Corp. have suspended some operations entirely. The crisis has prompted producers to slash more than C$6 billion in planned capital spending this year.

Trudeau’s fiscal stimulus package to combat the virus and the recession, originally pegged at C$82 billion, has since grown to C$202 billion. Officials have repeatedly said they’re willing to spend as much as necessary to shield what’s left of the economy.