Best and worst case scenarios for Canada at the G20 Summit

China’s ban this week on meat imports adds to an already long list of irritants between the two countries that cast serious doubt on whether Canada will ever be able to use the Asian giant as the main platform from which to reduce its reliance on the U.S. market. Roughly three quarters of Canadian shipments abroad currently end up across the southern border.

After coming to power in 2015, Trudeau had put China at the center of his government’s trade diplomacy and even toyed with the idea of a free trade agreement -- pledging to double two-way trade in a decade.

But recent geopolitical developments, coupled with a Canadian public wary of Chinese investment in key sectors, upended those plans.

U.S. charges late last year against Huawei Technologies Co. and the arrest of its chief financial officer, Meng Wanzhou, in Vancouver put Trudeau squarely in China’s cross hairs. Since then, Beijing has detained two Canadians, halted imports of canola and is now turning away meat shipments from Canada. 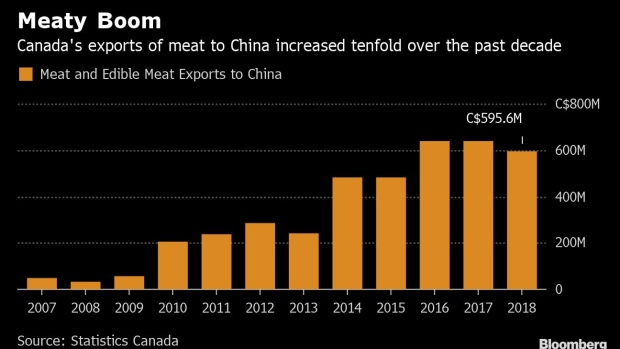 The latest dispute began with the discovery of falsified permits from pork producers in Canada, prompting the Chinese government to ban the import of all Canadian meats effective June 25, according to a notice from the Chinese embassy in Ottawa.

Canada exported about $596 million (US$455 million) in meat products to China in 2018, the majority of which were pork and pork products, according to customs data from Statistics Canada. The restrictions on meat follow a ban on canola earlier this year, a more significant development given it impacts exports that totaled $4.3 billion last year.

But the two trade moves are simply the culmination of souring relations now going on for almost two years. A personal visit by Trudeau in late 2017 aimed at spurring free trade talks fell flat over demands for labor, gender and environmental guarantees. Then Trudeau shot down a $1.2 billion bid by a Chinese construction firm for Aecon Group Inc., citing advice from national security agencies.

All this threatens to bring trade with Canada’s second largest export market -- and among its fastest growing -- to a standstill. Total merchandise shipments to China have nearly tripled in the last decade, reaching about $26.8 billion in 2018, according to Statistics Canada.

The canola and meat restrictions now apply on $4.9 billion in Canadian shipments, putting almost one-fifth of total exports to the country from Canada at risk.

Trudeau’s government has sought to downplay the meat ban, even insinuating the affected product isn’t Canadian, and has asked the Royal Canadian Mounted Police to investigate the falsified certificates. The prime minister may cross paths with Chinese President Xi Jinping at the Group of 20 summit this week in Osaka, Japan.

But with producers in the dark over when it will be lifted, many are already looking for other markets in Asia. That effort is helped by the fact Canada is part of the sprawling Trans-Pacific Partnership trade deal led by Japan that took effect last year.

“Thankfully we do have the CPTPP agreement in place in the Asia marketplace that’s allowing us to diversify some of our product to Japan, for example,” David Moss, general manager of the Canadian Cattlemen’s Association, said by phone from Calgary. “You never want to have all your eggs in one basket.”

China, however, is a tough market to replace. In the short term it’s going to hurt the Canadian pork industry.

“We can ship to other countries and there’s a long list of them,” Martin Lavoie, president and chief executive officer of Canada Pork International, said in a phone interview. But there are “some items that are popular in China” that will be impacted and it won’t be able to find a new home for them easily.

--With assistance from Chris Fournier.