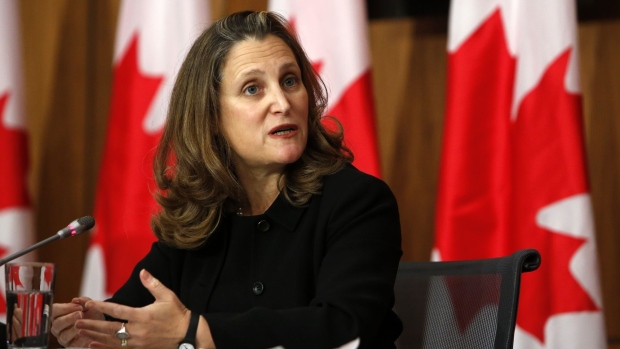 Freeland, who was appointed to the job in August after the resignation of Bill Morneau, said the Liberal government needs to turn its attention to recovery efforts and move beyond simply “limiting the damage” from Covid-19. This should include “meaningful” investments in things like the green economy, innovation and efforts to support “good jobs.”

“To ensure that our recovery is as broad, robust and complete as possible, we will need to build our way out of it. Targeted, carefully thought-out investment -- on a meaningful scale -- is how we will climb out of the coronavirus recession most quickly, and most effectively,” the finance minister said Wednesday in a speech to the Toronto Global Forum. “Limiting the damage is a necessary but not sufficient condition for future growth.”

The comments build on hints from Prime Minister Justin Trudeau that he wants to keep the fiscal taps open beyond emergency measures, making the government’s role in the recovery the central political debate through the new year. The main opposition Conservatives are already threatening to drag the Bank of Canada into the melee.

Freeland tried to assuage fears about the Liberals’ Covid-19 debt-financing strategy in her speech, citing an opportunity to lock in historically low interest rates with the issuance of longer-term bonds. She also said Canada had ample fiscal firepower heading into the coronavirus crisis, with the lowest net debt-to-GDP ratio in the Group of Seven.

The finance minister vowed the Liberal government would return to its pre-coronavirus budget strategy, setting new fiscal anchors as soon as the crisis subsides. “We will resume the long-standing, time-tested Canadian approach, with fiscal guardrails and fiscal anchors, that preceded this pandemic,” she said.

The Liberals took power in 2015 with three fiscal anchors: balancing the budget, maintaining Canada’s AAA credit rating and a declining debt-to-GDP ratio. While it still enjoys AAA status from two major global rating agencies, Fitch downgraded Canada in July on concerns over a a spike in emergency spending.

Freeland nonetheless put down a marker for those concerned the Trudeau government is adopting radical economic policies.

“While advocating expansive fiscal policy to battle Covid-19 -- and to grow our way out of the coronavirus recession -- I am not among those who think Canada should have a fling with Modern Monetary Theory, which holds that deficits don’t matter for a government that issues debt in its own currency,” she said.