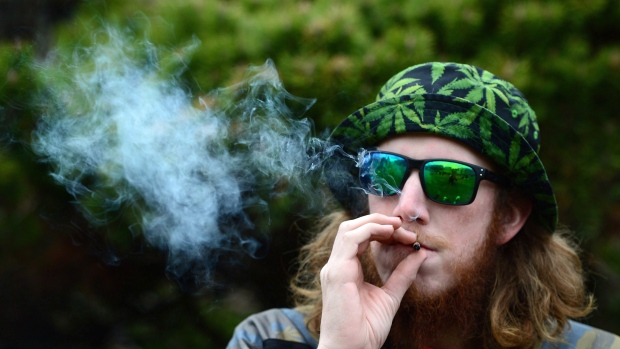 A man smokes during a 4/20 rally on Parliament Hill in Ottawa, on Thursday, April 20, 2017. , THE CANADIAN PRESS/Sean Kilpatrick

Recreational pot should be legal in Canada by summer, but it won’t be glamorous.

Producers trying to market their product face a battery of proposed government restrictions similar to those governing the sale of cigarettes. Labels may have to display graphic health warnings, adhere to standardized lettering and limit the use of colors and “brand elements.” Celebrity endorsements and consumer testimonials are banned.

“You’ve got no advertising, you have plain packaging, how are you going to differentiate yourself and grow your market?” said Levine, whose company manages $650 million.

Officials say their goal is to squeeze out criminal dealers, not encourage more drug use by making it look fun. “This is really predicated entirely upon a public health model, and not a commercial model,” said Bill Blair, the government’s marijuana point man and a former Toronto Police Chief. “We want to do a better job of protecting our kids.”

That doesn’t wash with Joe Potter, co-founder of Trider’s Craft Beer, a family-owned brewer that sells a Brew-Deau brand with the likeness of Prime Minister Justin Trudeau on the label at a Nova Scotia farmer’s market. The regulatory caution around marijuana will hurt the market and is “behind the times,” he said. “If they all have to package exactly the same, boring packaging,” he said, “that’s going to be a real issue.”

It’s a challenge for marketers such as Carol Levine, chief executive of energi PR in Montreal, who says pot producers will have to limit traditional advertising tools such as bright colours or cartoons of celebrities. “That’s what’s going to make it so difficult, because investors are going to want to see sales,” she said.

Trudeau’s Liberals are aiming to make marijuana legal around July. The federal health ministry will end a public comment period on Jan. 20 for proposed marketing regulations that would support the legislation still working through Parliament.

Canopy and Organigram Holdings Inc. were developing deals with rapper Snoop Dogg and the owners of the cult Canadian TV show Trailer Park Boys, respectively, when a federal task force recommended it should be illegal to promote marijuana by linking it with glamour, excitement or risk.

Greg Engel, Organigram chief executive officer, still plans to tie his brand to the series known for drinking, smoking, profanity and general misadventure. “We aren’t looking for a celebrity endorsement per se, we are creating a brand off of that group,” he said.

Engel wants ad rules closer to those that govern alcohol, rather than tobacco, which are more restrictive. In Canada, cigarette packages feature warnings that include graphic images of diseases linked to smoking, leaving less space for brand names. “They want to make sure people are educated,” Engel said by phone. “Well part of that education is the branding that goes along with that product.”

Justin Creally, co-founder of North Strategic in Toronto, says advertising should focus on middle-aged users who want a safe product, and try to get more exposure in the media and at public events as well as using paid media campaigns. “Companies can tell stories about real Canadians seeing the benefits, whether those are medical or recreational,” he said.

Duncan McGillivray at Strong Coffee Marketing in Edmonton suggested producers keep product lines and target audiences simple. “There are so many different strains being produced, it might start to confuse consumers,” he said. With major social media websites like YouTube probably blocking explicit drug advertising, smaller online forums such as discussion groups may be better.

Canada’s recreational market may take years to mature and there will be unexpected opportunities and setbacks, according to Caitlin Kealey, CEO of MediaStyle in Ottawa. She advises having a longer-term strategy because “the stigma around it may lessen over time.”

Marijuana producers also said their sales pitch will focus on the higher quality and reliability of legal product, a message that could resonate with the recent surge in rise in fentanyl-related deaths.

Bruce Linton, Canopy chief executive officer, said he won’t be flying in Dogg to do promotions, but there may be more subtle ways to advertise. “Can we have a birthday party for him and tie that to a video? No. But can we have the product branded by a corporation which is controlled by a named celebrity? Yes.”