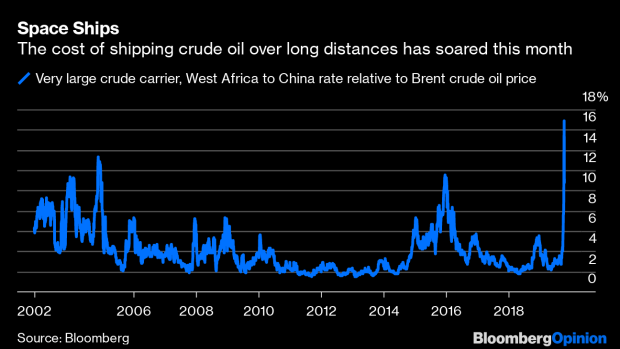 (Bloomberg Opinion) -- Senator Elizabeth Warren’s pledge to ban fracking is her chief claim to fame (or infamy) in oil and gas circles. She said something less eye-catching during the candidate debate this week that should nonetheless register in Houston:

Warren was responding to a challenge over Syria. That this was just one of many thrown at her during the debate tells you how much momentum she’s gained. More importantly, Warren’s view looks similar to that of the man she would like to evict from the White House. Here is something President Donald Trump had to say on the subject during a somewhat hectic 1,000th day in office (emphasis mine):

They’ve [Turkey and Syria] been fighting for a thousand years. Let them fight their own wars. The people of South Carolina want to see these troops come home. And I want an election focused on that. … I’d be willing to bet anything, political instinct, that that’s what the country wants.(1)

The methods and language may be different. One also imagines Warren takes a more conventional approach when writing letters. But neither looks committed to the U.S. presence that has endured in the Middle East for decades.

This is one of those things that both feels new and like it has been building for a while, like a glacier collapsing after long years of subliminal melting. Trump’s ambivalence to U.S. security guarantees and troop deployments is long-standing, but there’s a thread of continuity with his predecessor’s reluctance to engage forcefully in Syria.

Now, a potential successor seems fine with America stepping away, too. Warren’s campaign appeared to walk back her comments somewhat with a tweet, limiting the scope to Syria. And it’s true that she wrote more positively about U.S. alliances in a Foreign Affairs essay published earlier this year than anything we’ve heard from Trump. But that same essay also emphasized economic renewal at home and fair trade far more than keeping boots on the ground elsewhere, leaning more toward America First than Pax Americana.

All this carries profound implications for oil and gas markets, which, as I wrote here a couple of years back, grew up on the back of globalization and U.S. security guarantees. That may seem inconsequential with oil prices now actually lower than they were just prior to last month’s unprecedented attack on Saudi Arabia. But that’s partly because another facet of America’s relationship with the world — trade — is also undergoing seismic change and weighing on economic forecasts.

It’s also because Saudi Arabia moved quickly to calm nerves by scrambling to ensure supplies to customers, maintaining liquidity like a “central bank of oil,” as energy economist Philip Verleger puts it. That’s good but, as he also acknowledges, doesn’t guarantee it can maintain that role successfully — especially if its chief bodyguard checks out.

September’s attacks established that the heart of the global oil system is vulnerable. America’s remarkably restrained response — notwithstanding the rhetoric of “locked and loaded” — suggested the Carter Doctrine is on life support. Even the subsequent deployment of extra U.S. troops to Saudi Arabia comes with the notable catch, as trumpeted by Trump, that Riyadh apparently will pay for them. “Americans going pseudo-mercenary,” as geopolitics analyst and author Peter Zeihan calls it, and echoing a similar idea floated by Poland to secure a U.S. base on its soil.

It’s possible Russia or even China may try to further supplant America’s role in the region. It’s a virtual certainty turmoil will increase from here. We’re witnessing a sea change, and consequent rise in risk, that is not yet being priced in.

Or maybe it is. There’s been a curious development in an often ignored corner of the oil market this month, with freight rates on supertankers spiking to unheard-of levels.

The attack on Saudi Arabia prompted a scramble for barrels, especially from Asian refiners. Meanwhile, U.S. sanctions on Chinese tanker operators linked to Iranian oil shipments, as well as fallout from sanctions on Venezuela, have effectively made a chunk of tanker capacity untouchable. It’s a perfect storm. But as the authors of a new report from the Oxford Institute of Energy Studies write, it may also offer markets “a glimpse of what de-globalisation could look like.”

We’re used to the U.S. using its military and financial power to knit markets together to underpin energy security. Now, in an era of “energy dominance,” the U.S. feels emboldened to take a more mercantilist approach. And the transfer of value from oil producers to tanker owners, captured in that spike in the chart above, is a symptom.

In a market as densely interconnected as this, however, that isn’t the end of it. China’s biggest oil refiner is reportedly planning to cut output in response to those higher freight rates. That could lead to higher refined-product prices in Asia as supply scales back. Given the shaky outlook for demand, though, it might just mean discounts on crude oil prices instead, especially for barrels traveling long distances. As with American farmers, therefore, Trump’s sanctions may ultimately rebound on domestic frackers. Equally, Warren banning fracking and pulling the U.S. out of the Middle East would touch off a price spike for the ages.

Such reminders from markets may induce a more cautious approach from the White House; remember what fear of higher pump prices ahead of the midterms meant for Iranian sanctions last year? Plus, while Warren has gained on former Vice President Joe Biden, he remains the Democratic front-runner and on Wednesday characterized her stance on the Middle East as a “disaster.”

Yet Trump’s instinct that Americans may ultimately favor further withdrawal from the region can’t be ignored, even if it is predicated partly on overconfidence about energy independence. While Republican representatives joined with Democrats to rebuke him on Syria Wednesday, one day of standing up must be set in the context of three years of genuflecting. Populism is a hell of a drug. Energy supply chains built up over the past 70-odd years are likely to unravel further should either Trump or, if nominated, Warren end up winning next November. Like last month’s Saudi attack, their agreement on something of substance is one of those strange outcomes warning we’re in a new world.

(1) The reference to South Carolina was a jab at Senator Lindsey Graham, who has been uncharacteristically critical of Trump over hisdecision to withdraw U.S. troops from Syria.