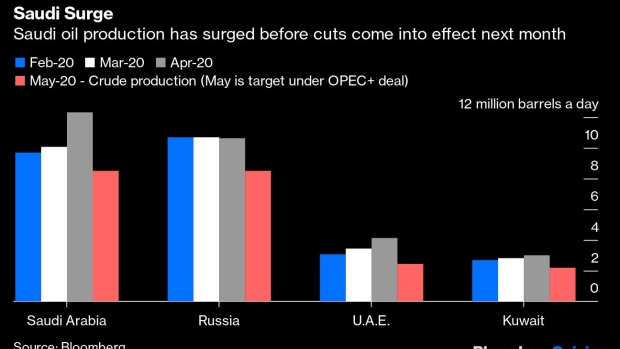 (Bloomberg Opinion) -- Banning imports of crude oil from Saudi Arabia is just the sort of gesture that might appeal to President Donald Trump, who has vowed to protect jobs in the U.S. shale patch. But such a move wouldn’t do much to reverse the decline in prices that has seen the May contract for West Texas oil fall below zero.

As we speak, there is a small armada of ships full of Saudi crude heading to the U.S. Most of it is scheduled to arrive next month, when storage space is expected to be near full and refiners are highly unlikely to be ramping up processing rates. Bloomberg has identified 20 very large crude carriers, known in the industry as VLCCs, that loaded since the beginning of March, each hauling about 2 million barrels of the kingdom’s crude toward American ports on the Gulf and West coasts. They are due to arrive by the end of May. Several more that aren’t showing a destination could be heading the same way.

It's not immediately clear who now owns most of the Saudi crude on those tankers. Traditionally the kingdom sells its oil at its export terminals, meaning that any ban would hit the American refiners who've purchased the cargoes, rather than the Saudis.

However, four of the ships that loaded in March are owned by the National Shipping Company of Saudi Arabia, known as Bahri, while eight out of the 10 vessels that have sailed so far in April were chartered by the same company. That suggests that at least some of the crude may not have been sold before it left Saudi Arabia, making it a prime target for import tariffs or an outright ban.

It just won’t make much of a difference whether that oil is sold on American shores when it finally arrives, or whether it’s forced to go someplace else, where it will complete with U.S. exports. That’s because the gushing oil glut and dramatic evaporation of demand in a world under lockdown is happening right here and now. And oil prices are responding.

Yes, Saudi Arabia and other OPEC+ countries are coming under pressure to bring forward their recent, much-lauded output cuts. But for now they aren't due to come into effect until the start of May. And they are starting to look less impressive every day that passes.

There is no sign of that surge ending any earlier than May. Until then, all three countries appear to be planning to continue to pump as much as they can. Bringing the cuts forward, even by the 10 days remaining in April, would remove about 127 million barrels of potential oversupply from the market. That’s more than one and a half times the storage space left in the U.S.’s Strategic Petroleum Reserve, which Trump is so eager to fill up at such a good price.

Advancing the cuts creates its own problems, though. The producers have contractual obligations to deliver that crude — or at least the portion they aren't going to put into storage tanks. And since everyone slashed their prices for April shipments in order to secure buyers, it’s likely that most of this month’s shipments have been sold.

Pan out, and you’ll see that OPEC+ countries are facing exactly the same market pressures as oil producers in Texas. Demand has collapsed everywhere. Although it was hyped as a voluntary output cut, the OPEC+ deal was really just as much a reaction to market forces as what we’re seeing in Texas or North Dakota, albeit an attempt to do it in a slightly more orderly way.

The collapse in the WTI price to negative territory is the market's way of telling producers everywhere: Just stop pumping!