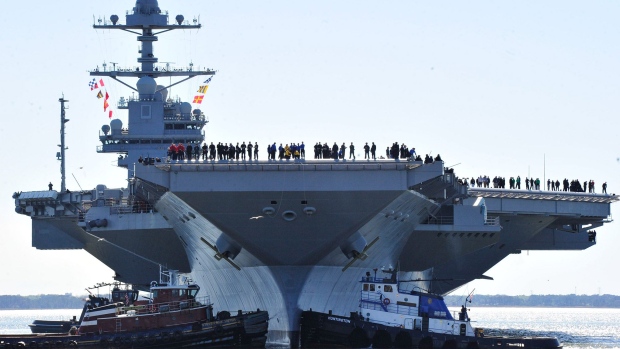 (Bloomberg) -- U.S. Navy Secretary Richard Spencer says Donald Trump told him to keep working on persistent problems with the service’s costliest ship, freeing him from a pledge that “you can fire me” if the aircraft carrier’s long-delayed weapons elevators weren’t installed and working by August.

Spencer said in an interview that the president didn’t mention the “fire me” offer at a meeting about two weeks ago.

“He just said keep going” with efforts to fix the USS Gerald R. Ford, Spencer said. “He said it was a very complex system” and “you seem to be knocking down the issues.”

Among the flaws that have delayed full capabilities of the carrier and driven its cost above $13 billion are the elevators needed to lift munitions from below deck. Only four of the 11 “advanced weapons elevators” that should have been installed when the ship was delivered in May 2017 are now working, according to Spencer.

The Navy secretary, a blunt-talking former investment banker, disclosed in a January speech that he’d made the offer to Trump at the annual Army-Navy football game in December. He said he asked the president “to stick out his hand, he stuck his hand out and I said, ‘Let’s do this like corporate America.’ I shook his hand” and said “the elevators will be ready to go when she pulls out” in August, after the vessel’s post-delivery shakedown phase is finished, “or you can fire me.”

Instead, the carrier got under way this month after 15 months of post-delivery work with only the four elevators installed. It’s now beginning as as much as 18 months of additional at-sea verification tests.

During a presentation at the Heritage Foundation in Washington this week, Spencer said he made his “fire me” offer based on strong assurances from Huntington Ingalls Industries Inc., the carrier’s prime contractor, that all 11 weapons elevators would be installed by mid-July.

But at a May meeting, he recounted, company officials said “oops.”

They said the “elevators aren’t going to be ready until the end of 2020, possibly 2021,” Spencer said. “That’s when I went, ‘Do they really know what they are doing?”’

He said he called Huntington’s chairman, retired Admiral Thomas Fargo, and asked, “Does the board of directors know what’s going on with management here, because our trust and confidence on this specific project with the elevators has been eroded significantly?’”

Beci Brenton, a spokesman for Newport News, Virginia-based Huntington Ingalls, said in a statement that “we are proud of the work we have accomplished on USS Gerald R. Ford” during the ship’s just-completed dockside phase. We completed important work on multiple ship systems. We will continue to support our Navy partner in their preparations for the ship’s deployment.”

Trump attended the Gerald R. Ford’s commissioning in Newport News in July 2017, saying the nuclear-powered super-carrier was a “100,000-ton message to the world” about America’s military might and vowing to expand the Navy’s fleet.

To contact the reporter on this story: Tony Capaccio in Washington at acapaccio@bloomberg.net

To contact the editors responsible for this story: Bill Faries at wfaries@bloomberg.net, Larry Liebert, Ros Krasny