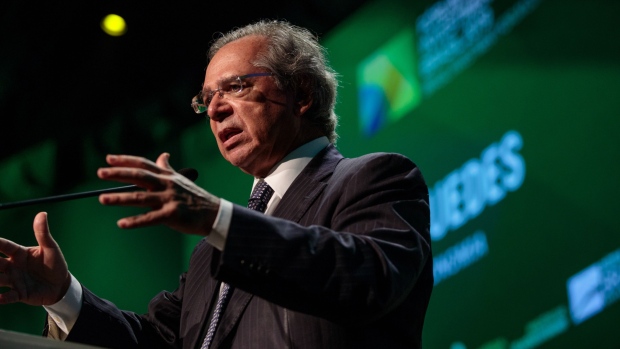 President Donald Trump is making “a terrible mistake” in his decision to apply tariffs to Brazilian steel exports, according to the economy minister of the Latin American country.

“It’s wrong of Trump, he’s defending protectionist policies,” Guedes said. “There’s no manipulation. Trump’s speech is political; it’s all to do with the election.”

Trump announced on Monday the reinstatement of tariffs on steel and aluminum from Brazil and Argentina on a series of Twitter posts in which he accused the two countries of cheapening their currencies to the detriment of U.S. farmers. The news came as a shock to the administration of President Jair Bolsonaro, which has worked to strengthen ties with the U.S. government since taking office. However, it is still not clear when the tariffs would take effect since there has been no follow-up from those tweets.

Brazil and Argentina have been presiding over a massive devaluation of their currencies. which is not good for our farmers. Therefore, effective immediately, I will restore the Tariffs on all Steel & Aluminum that is shipped into the U.S. from those countries. The Federal....

.....Reserve should likewise act so that countries, of which there are many, no longer take advantage of our strong dollar by further devaluing their currencies. This makes it very hard for our manufactures & farmers to fairly export their goods. Lower Rates & Loosen - Fed!

“All the time we are saying that we want to open up our economy,” he said. “This is true for the U.S. — we want to promote trade between the two of us. He’s making a serious mistake.”

Over the past year, Brazil has already agreed to let the U.S. use its Alcantara rocket launch site and exempt U.S. citizens from the need for travel visas. Brazil’s foreign policy has also become almost totally aligned with that of the Trump administration.

In return, the Trump administration has labelled Brazil a major non-NATO ally, but it has declined to set a timetable for the country’s application to join the Organisation for Economic Co-operation and Development and it has maintained restrictions on Brazilian raw meat and sugar.

In the interview, Guedes added that the Brazilian government is going to “reassess the situation with the Americans” in the wake of Trump’s decision, but he expressed confidence in the country’s ability to find plenty of global trade partners.

“Brazil was a closed economy for 40 years,” he said. “There will be no shortage of dancing partners. Everybody wants to dance with us.”