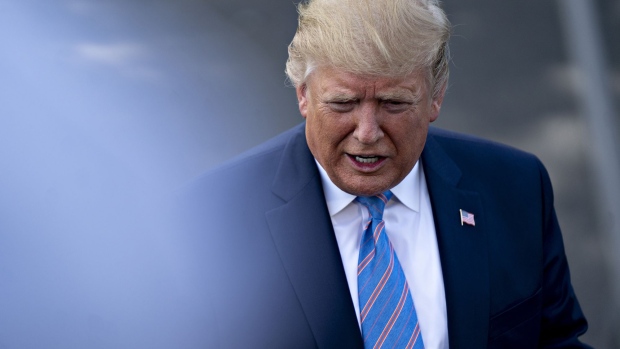 U.S. President Donald Trump speaks to members of the media before boarding Marine One on the South Lawn of the White House in Washington, D.C. , Photographer: Andrew Harrer/Bloomberg

(Bloomberg) -- Former president Donald Trump used nearly $700,000 in campaign funds to pay the lawyers who defended him at his second impeachment trial, according to filings with the Federal Election Commission.

Trump’s campaign committee, since renamed the Make America Great Again PAC, paid $580,000 to the Philadelphia law firm of Michael van der Veen and Bruce Castor and another $100,000 to a third impeachment defense lawyer from Alabama, David Schoen, according to filings released Saturday.

The trio’s plodding performance received largely negative reviews from legal commentators, as well as many Republican lawmakers, who compared the defense team unfavorably to the Democratic House members arguing to impeach Trump for inciting the Jan. 6 Capitol riot.

Trump was nonetheless acquitted along party lines, but several Republican senators joined Democrats in voting to convict the former president, who had survived his first impeachment trial with only one Republican defection.

“Anyone who listened to President Trump’s legal team saw they were unfocused, they attempted to avoid the issue, and they talked about everything but the issue at hand,” said Louisiana Senator Bill Cassidy after the first day of arguments on Feb. 8. Days later, he became one of seven Republican senators to vote to convict Trump.

Trump spokesman Jason Miller slammed Democrats for pursuing the second impeachment, which he said was aimed at preventing the former president from running and winning again in 2024.

“While this partisan charade was soundly defeated, and President Trump was completely exonerated, these things cost money,” said Miller.

The FEC filings showed that Trump’s political committees raised $50.5 million in the first half of the year. The Trump campaign spent a total of $8.6 million challenging the results of the 2020 election, according to the filings.

Before he worked on Trump’s impeachment, Schoen represented the president’s longtime ally Roger Stone. Castor is a former district attorney in Pennsylvania, where he was criticized for agreeing not to prosecute Bill Cosby for rape. That deal was cited by the state supreme court in June when it overturned Cosby’s later conviction.