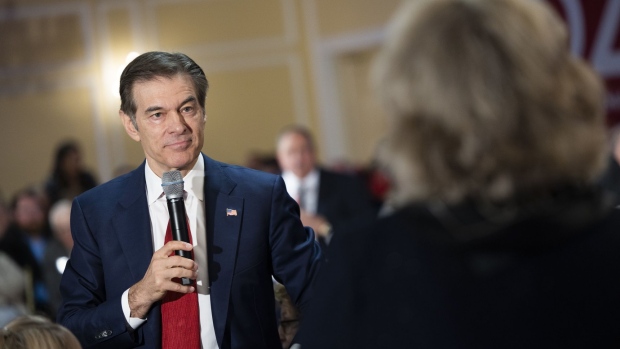 Mehmet Oz, celebrity physician and U.S. Republican Senate candidate for Pennsylvania, listens to a question from an attendee during a campaign event in Bristol, Pennsylvania, U.S., on Thursday, April 21, 2022. Oz, known for his one-time television program the Dr. Oz show, earlier this month was endorsed by Donald Trump providing crucial support that could swing a close race. , Bloomberg

(Bloomberg) -- Donald Trump is trying to rally his staunchest Pennsylvania Republican voters to Mehmet Oz’s side as the celebrity physician struggles to break loose from a crowded Senate primary field and provide the former president with his second consecutive victory-by-proxy of the early 2022 midterm election cycle.

Trump notched a win Tuesday after his pick for Ohio’s Republican Senate nominee, venture capitalist JD Vance, came from behind to prevail in that crowded race. The question now is whether Trump’s seal of approval will deliver the same boost in neighboring Pennsylvania.

“The evidence from the polling is that Dr. Oz really hasn’t received any bump as a result of the Trump endorsement to this point,” said Berwood Yost, director of the Center for Opinion Research at Franklin & Marshall College.

Trump has used the 2022 midterms to tighten his hold on the GOP by endorsing candidates in races across the country. But his nod toward Oz over McCormick is arguably his most consequential pick of the election season. Pennsylvania is a key battleground state that Trump narrowly lost to President Joe Biden in 2020. And Trump’s backing of Oz generated rare public dissent from some of his staunchest supporters.

The Franklin & Marshall College Poll, conducted April 20-May 1, showed Oz leading McCormick 18% to 16%, compared with a lead of 16% to 15% in an April survey before Trump’s endorsement. Barnette rose by 5 percentage points from the earlier poll to 12%, but almost 40% of voters were still undecided for the May 17 primary.

The seven candidates and their allies have already set an ad spending record for a Pennsylvania Senate primary, and after all of the negative spots, more Pennsylvania Republicans have an unfavorable opinion of Oz than favorable, Yost said.

Trump’s endorsement of Oz prompted some people to take another look at him, but also sparked confusion over the former president’s choice, said Bill Bretz, chairman of the Republican Committee in Westmoreland County near Pittsburgh where Trump is holding the rally for Oz.

A former reality television star himself, Trump has said Oz has shown he’s popular through his long-running program and has the best chance to win the November election to replace retiring Republican Senator Pat Toomey in one of the key races that will decide party control of the chamber.

While there will likely be a big crowd to see Trump, the rally probably won’t generate a huge boost in support for Oz in western Pennsylvania, said Nick Sherman, a Republican commissioner in Washington County who hasn’t endorsed a candidate in the race.

“He’s put his bet down on his horse, people know it, and they’ve already made up their mind of whether or not they’re going to vote for that person,” Sherman said.

But Oz has faced questions over his conservative credentials on issues such as abortion and gun control, said Kristin Davison, a Republican consultant for McCormick, who also consulted for defeated Senate primary candidate Josh Mandel in Ohio.

“In Pennsylvania, you see more voters saying, ‘We love the president, but this guy’s not a Republican. We just can’t get there with him,’” Davison said.

Oz said in an April 25 debate that McCormick -- who met with Trump days before the former president publicly backed Oz -- presented the same arguments to Trump and he “saw right through them, did not endorse him, and then he endorsed me.”

Davison said abortion has become a bigger issue in the race with the leak of the draft U.S. Supreme Court decision that would overturn U.S. abortion rights. McCormick and Barnette -- who has said she was the product of a rape when her mother was 11 -- accused Oz of flip-flopping on the issue during their final televised debate on Wednesday.

Oz says he opposes abortion rights and believes life begins at conception. But his rivals pointed to a 2019 radio interview in which Oz said while he wouldn’t want a family member to get an abortion, he was worried about state efforts to ban them because it would lead to unsafe procedures. He also disputed the idea there’s a fetal heartbeat by the sixth week of a pregnancy.

Yanick said he hasn’t changed his position and as a heart surgeon, Oz has held a baby’s tiny beating heart in his hand and knows how precious life is.

“One of the reasons President Trump endorsed Dr. Oz is because he’s strongly pro-life, and he’s been very vocal about this for years,” she said.