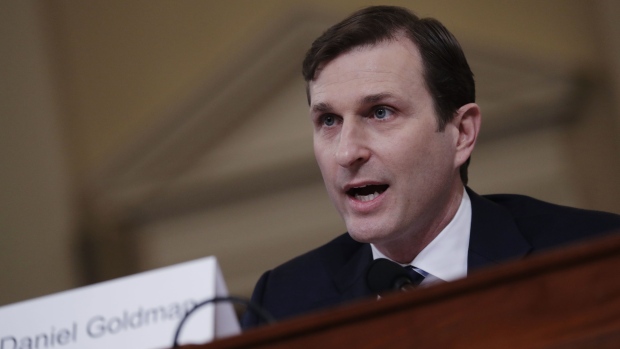 Daniel Goldman, Democratic counsel to the House Intelligence Committee, speaks during a House Judiciary Committee impeachment inquiry hearing in Washington, D.C., U.S., on Monday, Dec. 9, 2019. House investigators give their final summations today in the Democrats' case against Trump as they debate how far they want to go in drafting articles of impeachment this week. , Bloomberg

(Bloomberg) -- Dan Goldman, a counsel for Democrats at Donald Trump’s impeachment trial who is now vying for a House seat in New York’s 10th Congressional District, received a surprise on Wednesday: an endorsement from Donald Trump.

The campaign for Goldman -- who has never held elected office and has spent millions on his own campaign -- immediately responded with a statement disavowing the endorsement as a “pathetic attempt at fooling Democrats” and saying that Trump was “pretending to endorse Goldman.”

“True to form, Trump is trying to meddle in an election,” the statement said. “Buckle up Donald. Dan’s coming for you.”

Trump called Goldman “honorable, fair, and highly intelligent” in a statement on the platform Truth Social. He said that while it was his “honor to beat him, and beat him badly,” he commends Goldman for being “very compassionate and compromising to those within the Republican Party” and working to stop “the Radical Left Democrats, who he knows are destroying our Country.”

The former prosecutor for the Southern District of New York has built his campaign largely on his record during the impeachment proceedings. In its endorsement, the Times Editorial Board lauded his “close working relationships in Washington” developed during the trial in its endorsement.

His more progressive rivals, particularly Niou and Jones, have taken to rallying against the front-runner with the slogan “Anyone but Goldman.” The back-and-forth between the ex-president and Goldman is likely to accelerate that strategy.

“Donald Trump just endorsed my multi-millionaire opponent, in case you needed a reminder of what the stakes are,” Niou tweeted on Wednesday.