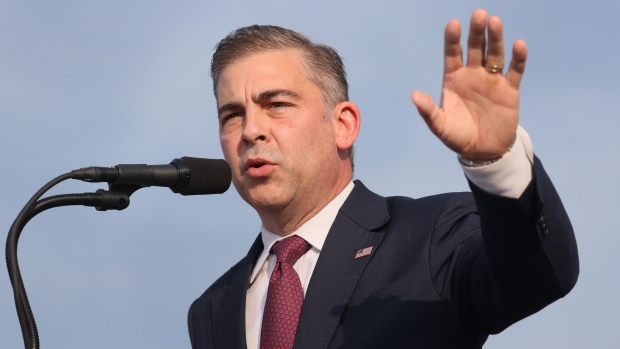 (Bloomberg) -- A candidate endorsed by Donald Trump won a special Republican primary race for a U.S. House seat in Ohio on Tuesday, bolstering the former president’s efforts to steer election outcomes heading into the 2022 congressional races.

Coal industry consultant and lobbyist Mike Carey defeated 10 other candidates in a crowded GOP primary to replace former Representative Steve Stivers, who resigned in May to lead the Ohio Chamber of Commerce, according to results from The Associated Press. Carey will now face state Representative Allison Russo, who easily won the Democratic primary, in the Nov. 2 special general election to fill the seat.

Democrats were also holding a special primary election in another part of the state to replace Marcia Fudge, now Department of Housing and Urban Development secretary, that became a proxy fight between the party’s progressive and centrist wings over support for President Joe Biden.

Carey’s victory comes a week after Susan Wright, whom Trump endorsed to replace her late husband, former U.S. Representative Ron Wright, lost a runoff election in Texas to Republican state Representative Jake Ellzey. Trump has regularly said that almost every candidate he supports wins easily and that his endorsement is the most powerful and sought-after in politics.

Another Trump-backed candidate losing in consecutive weeks would have prompted questions about the former president’s political operation and ability to influence 2022 midterm election races as he holds out the prospect of running against for president in 2024.

“A lot of people are watching this one, it’s a big deal. So please get out and vote for Mike Carey,” Trump said Monday.

In the special Democratic primary to replace Fudge, Nina Turner, who was a national co-chair of Senator Bernie Sanders’ 2020 presidential campaign, faced Shontel Brown, a Cuyahoga County councilwoman and Democratic chairwoman, and 11 other candidates. The winner will face Republican nominee Laverne Gore in the Nov. 2 special general election, but the district near Cleveland is solidly Democratic.

Turner had the backing of Sanders and Representative Alexandria Ocasio-Cortez, while Brown was supported by establishment Democrats like 2016 presidential nominee Hillary Clinton and House Majority Whip James Clyburn of South Carolina, whose endorsement of Biden helped him win the party’s nomination.

In the Republican primary for Stivers’ seat, Trump joined a tele-rally for Carey, a consultant at American Consolidated Natural Resources Inc. and past president of the Ohio Coal Association, on July 20 and again on Monday night, and a Trump-based super PAC reported spending more than $417,000 on TV and digital ads, text messaging and emailing in a last-minute push for Carey, according to documents filed with the Federal Election Commission.

But there were other prominent GOP endorsements competing with Trump’s. Stivers backed Ohio Representative Jeff LaRe and aired campaign ads for him; Kentucky Senator Rand Paul and his affiliated super PAC supported former state Representative Ron Hood; the Republican organization of Franklin County, which includes Columbus, endorsed state Senator Stephanie Kunze; and Ruth Edmonds had the backing of the Right Women PAC led by Debbie Meadows, wife of former White House Chief of Staff Mark Meadows. Bob Peterson, a farmer who has represented parts of the district as a state senator, touted endorsements from 150 local GOP leaders and Ohio Right to Life.

The sprawling district encompasses all or parts of 12 counties and includes Columbus suburbs and parts of rural Appalachia. Trump carried the solidly Republican-leaning district with 57% of the vote in 2020, according to data compiled by Bloomberg Government.

Before Tuesday’s primary, Carey had cited a June poll of likely GOP primary voters by Trump pollster Tony Fabrizio that showed his support jumped from 20% to 52% when voters were told about Trump’s endorsement.

“When people know that President Trump has endorsed me, they’re going to vote for me,” Carey said.